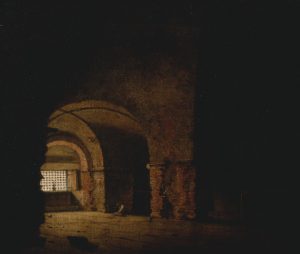 CFP: Criminality in the Eighteenth Century

A Call for Papers for The 18th-Century Common

The 18th-Century Common seeks contributions to a collection of short public humanities essays on all aspects of criminality.  The eighteenth century saw increasing attention on criminal behavior, on those who violated the law, and on the array of potential consequences for engaging in crime.  Overflowing jails led to creative incarceration solutions such as the use of decommissioned ships (termed “prison hulks”) to house inmates.  Executions were a public spectacle.  Highwaymen were romanticized as anti-heroes.  The brutal realities of hard labor–including beating hemp or dredging the Thames—were featured in lurid accounts.  Increased media attention led to public fears of rampant criminal behavior.

Essays for this collection might focus on (but are not limited to) the following:  accounts of crime and trials; criminal biography; representation of crime and criminals in visual, fictional, and popular culture; early attempts to develop psychological profiles of criminals and determine why criminals commit crimes; criminal women; public executions; the threat of transportation; characterizations of law enforcement; the state of prisons; vigilante justice.

All critical approaches to representations of criminality are welcome, and interdisciplinary approaches are encouraged.

Please submit short essays written for a nonacademic audience (up to 2000 words) and/or any questions about this CFP to Debra Bourdeau at [email protected] for consideration.