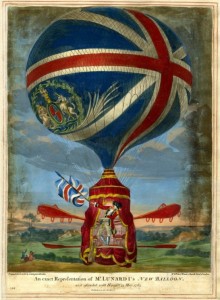 An exact representation of Mr Lunardi’s New Balloon as it ascended with himself 13 May 1785. © The Trustees of the British Museum

Richard Holmes’ The Age of Wonder describes the balloonomania that seized France and England in 1783 when competing impresarios ascended in the first hot-air balloons.  Beyond Holmes’ chapter, there is even more balloonomania to explore.

Today, Thomas Keymer examines the venerable Samuel Johnson’s interest in balloons and human flight throughout his career in a post for the Oxford University Press blog:

Initially, Johnson saw huge potential in balloons for advancing human knowledge, and subscribed to a scientifically motivated scheme for high-altitude flight, which, he wrote, would “bring down the state of regions yet unexplored.” He was fascinated by thoughts of the view from above, though he couldn’t imagine seeing “the earth a mile below me, without a stronger impression on my brain than I should like to feel.” But in time Johnson grew more sceptical about the value of balloons—fragile, combustible, impossible to direct—for either transportation or science, and disease preoccupied him instead: “I had rather now find a medicine that can ease an asthma.” He never makes the analogy explicit, but it’s clear from his last letters that, consciously or otherwise, he came to associate his bloated, dropsical body with a sinking balloon, and his difficulty in breathing with an aeronaut’s struggle to stay inflated. In a gloomy, earthbound message just weeks before death, he seems to glimpse the void in Montgolfier shape. “You see some ballons succeed and some miscarry, and a thousand strange and a thousand foolish things,” he tells the enviably youthful, mobile Francesco Sastres: “But I see nothing; I must make my letter from what I feel, and what I feel with so little delight, that I cannot love to talk of it.”  [Read Keymer’s complete post here. ]

Gilbert King recently described the life of Sophie Blanchard, the first female aeronaut of the balloon craze in a post for Smithsonian Magazine’s website.

You can explore the Smithsonian Museum’s array of ceramics, textiles, paintings, furniture, and other objects commemorating and capitalizing on the balloonomania by browsing the collection The Birth of the Balloon at the National Air and Space Museum website.

Paul Keen’s new book Literature, Commerce, and the Spectacle of Modernity, 1750-1800, (Cambridge University Press, 2012) includes a chapter on Balloonomania; you can read a brief extract of the chapter here.