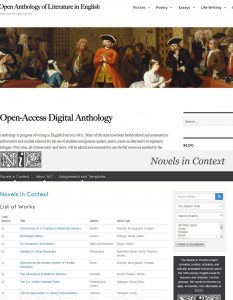 As any reader of The 18th-Century Common knows, the last quarter century has witnessed the astonishing digitization of thousands of texts from the past:  novels, poems, essays, histories, plays, many of them available for free.  For scholars, the creation of this Digital Republic of Learning has (on the whole) been a boon, enabling new modes of inquiry that could barely have been imagined a generation ago.  For students, however, the digitization of the archive has been a more mixed blessing.  As newcomers to the field, students can very easily find themselves overwhelmed by the sheer abundance of material that shows up in the simple Google search that is likely to be their first means of access.  Students are unlikely to know how to judge of the quality or authenticity of what they find, or to be able to recognize the difference between a well-edited text and something with virtually no authority whatsoever.  Texts are haphazardly distributed, some behind commercial paywalls such as Gale’s ECCO collection, while others are in reasonably well-curated but still imperfect archives like Project Gutenberg. Still others seem to have been put together with no thought whatsoever.  In keeping with the tendency of the Internet to level the field of information, all such texts come decontextualized in several senses.  Rarely are the texts that students or general readers are likely to find annotated to provide the kind of historical contextualization that most readers need to make sense of works from this period.  And, too, the fact of digitization decontextualizes all works from the past from the conditions of their production and dissemination; everything looks the same on the screen. 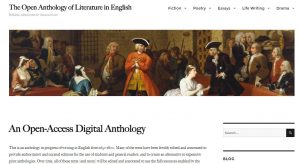 Our projects intend to improve the quality of eighteenth-century texts available for students, general readers, and scholars, and to enlist students in the project of producing them.  The Open Anthology of Literature in English aims to build a digital anthology from the ground up, offering digitized texts that have been edited for accuracy and annotated for modern readers.  Students are crucial collaborators and makers in this project.  Using the TypeWright tool at the 18th Connect project, they can correct the OCR of original texts, and in the process get to see what eighteenth-century print looked like.  And they can identify what should be annotated (who knows better than they do what they need in order to make sense of a work from the past?), and then research what they and readers like them need to know.  They get to work with TEI/XML, which means that they get to see the digital tools of the twenty-first century print shop.  As students complete texts, they become part of a permanent, open-access archive of reliable works, encoded in TEI/XML that is available for the use of teachers who want a place to which they can send their students.  Students thus create something that lives on past the term in which they are enrolled in the class, and the community of students and readers get an archive of free and reliable texts that take full advantage of the resources offered by digitization. 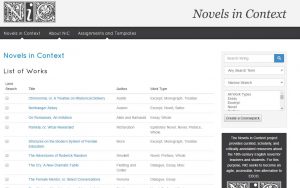 Novels in Context is a web-accessible TEI/XML database application focused on a particular moment in literary history.  Drawing on the practice of public scholarship, the free code ethos, scholarship around the digital archive and digital edition, and the Open Educational Resources movement, Novels in Context seeks to provide a curated, extensible, searchable, and reusable collection of primary source materials focused on the eighteenth-century English novel.  This project is unique not only in its use of database technology and the standardized TEI Simple markup but also in its commitment to the material page–each item is accompanied by quality page images sourced by hand from libraries and special collections.  If everything looks the same on the screen, so too in print anthologies, which deracinate the text from its reality in time and space.  Without understanding something about how a text or an utterance or a performance comes to be in our purview, agile, contextualized engagement with literature—much less the world at large—is impossible.  By involving students in its creation, Novels in Context works to fulfill the promise of feminist pedagogical theory that  urges both collaboration and connection, seeing students as critical makers—full, capable partners in the scholarly work of keeping our cultural heritage alive.

While these projects work to improve the quality of digital texts in an open, collaborative, and scalable way, they also speak to another concern with the market-driven tendencies of academic publishing.  The construction of a Digital Republic of Learning is and has been underway in myriad forms on the Internet since the 1990s, to be sure, but the past decade has seen a noted rise in the number of corporate fingers in the pot.  To be committed to the public goods of education, we need texts and pedagogies that are public and open, but they also need to be critical, rather than affirmative.  A user-generated open anthology of the kind we are imagining is a step in this direction.  As the eighteenth century teaches us, power in the public sphere is in large part a product of one’s ability to negotiate its social and technical components.  Looking toward the eighteenth century, which witnessed its own technological and social revolutions in the dissemination of knowledge, can also be of real use in our current educational context.  Knowledge and power, knowledge-power:  one of our most salient charges as teachers and scholars today must be to enable the fullest possible participation in public conversation.  And when we say “fullest,” we mean it in the broadest sense—rich, responsible, free, purposeful, ethical, capable of enabling new relations of power, new relationships between our present and our past, newly connected selves.

To that end, we seek collaborators on both projects, teachers and students who want to make creating digital editions eighteenth-century texts.  We will provide TEI/XML templates and lessons to enable students to become active, critical contributors to the textual commons.  Please contact [email protected] or [email protected] to find out how you and your students can join in the task of creating open, curated digital editions of texts from our collective past.

John O’Brien is the NEH Daniels Family Distinguished Teaching Professor at the University of Virginia. He is the author of Harlequin Britain: Pantomime and Entertainment, 1690-1760, and Literature Incorporated: The Cultural Unconscious of the Business Corporation, 1650-1850. He is currently working on a digital project designed to identify and archive poetry in eighteenth-century newspapers.

Committed to a technologically- and publicly-informed critical pedagogy, Tonya Howe is an Associate Professor of Literature at Marymount University who teaches widely at both the graduate and the undergraduate levels. Her research focuses on 18th-century British cultural studies, embodied performance genres, and digital humanities. She is currently working on the Novels in Context project and co-producing a Capital Fringe Festival song cycle on the Mary Toft affair.