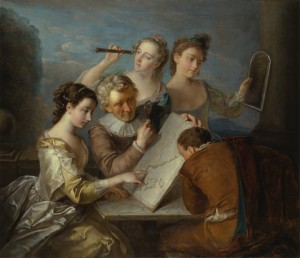 Counter to my own argument in Desire and Domestic Fiction (1987)  that domestic fiction proposes a self-enclosed household as a model for the modern nation, I’m contending that each Austen novel tears open the traditional household and disperses its members (especially daughters) by putting them into circulation. This is indeed what it means for a woman to be “out.”  It is thus because Austen’s novels propose a network as the model of a nation increasingly dependent on international trade that I now see them as the very examples of what a novel is and does.

If Austen’s households eventually settle down and the boundaries of her imaginary shire prove less permeable than at the novel’s opening, it is because she figured out a way of regulating the risk of self-devaluation that accompanies the dispersal and circulation of propertied families through a relatively open system of courtship. “The social season” was supposed to ensure that women of some breeding but little claim to property traveled in what Leonore Davidoff calls “the best circles.”  But Austen’s pump room and country dances never fail to include a few people–usually men–who exploit the rules of civility in order to put romance at odds with finance.  Those who engage with such people risk happiness, on the one hand, and security of position on the other.  In exposing the gap between emotional and economic value, the destructive energy of romance allows Austen to reorganize her household as a hub–a kind of relay station in a network whose managers minimize the risks of courtship.

Nancy Armstrong is the Gilbert, Louis, and Edward Lehrman Professor of English at Duke University. She teaches courses in the novel, eighteenth and nineteenth-century literatures and cultures in English, and critical theory, and she serves as editor of the journal Novel: A Forum on Fiction. She is the author of, most recently, How Novels Think: The Limits of Individualism 1719-1900 (Columbia University Press, 2006).