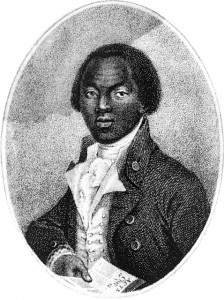 Olaudah Equiano was most certainly a key figure in the abolition movement of the eighteenth century.  His narrative, The Interesting Narrative of the Life of Olaudah Equiano, Or Gustavus Vassa, The African (1789), is one of the best known of the ere and represents the story of thousands of Africans captured and forced to live a life of misery and captivity in foreign lands.  However, in a 1999 issue of Slavery & Abolition, Vincent Carretta argues that Equiano may have been born in South Carolina and therefore falsified the parts of his narrative that described his journey across the Atlantic.  I argue that the information, if true, does not detract from the value of the narrative.  In fact, I suggest that Equiano’s representation of the truth is merely a reflection of how difficult it is to make a distinction between fact and fiction.  What Equiano testified to is the traumatic experience many of his friends and family had to experience; he was simply the most proactive and vocal in sharing the truth.  Writing his story while including small embellishments based on the honest and painful truths of others around him does not make him a liar.  They make him an author of historical fiction.  Authors of historical fiction desire to tell the truth, and in order to do so, they must exist slightly outside the realm of known fact.  In his novel Someone Knows My Name, originally published as The Book of Negroes (2007), Lawrence Hill reveals heart-wrenching details of the slave trade and ends up portraying history authentically.

Set in the mid- to late-eighteenth century, Someone Knows My Name begins with an aged Aminata Diallo (an African who was captured and sold into slavery at age 11) looking back on her life.  She has found herself in London working with the British Committee for the Abolition of the Slave Trade.  They have asked her to write a memoir in the fashion of historical author Olaudah Equiano.  This frame for narration allows Aminata to recall painful events in her past with accuracy and with the wisdom of age.  We learn that as a young child she watched both of her parents brutally murdered by her captors.  She travels months on foot to a port on the coast of Africa, where she then experiences the horrors aboard a slave ship.  Once she arrives in America, she is sold to a South Carolinian indigo plantation owner.  Her memories include both beautiful and painful recollections as well as her impression of the world as a child.  For authors of historical fiction, including Hill, the overall goal is to create an authentic representation of life in the past.  Much of the authenticity in a novel comes from a recreation based on fact, artifacts, and firsthand accounts.  Difficulty arises when the author includes too much historical description and overwhelms the reader or not enough knowledge and the novel thus loses some of its desired impact.  In order to include authentic details of the slave trade, Hill must address controversial issues like imperialism, religion, and rape.

Lawrence Hill does not hesitate to address the tough and often gruesome aspects of slavery.  The authentic portrayal of life as a slave, from capture to eventual freedom, creates a dynamic backdrop for the character-driven novel; however, his attention to detail does not derail the effect of the novel.  On the contrary, the authenticity enhances the novel’s aim.  Fortunately for historians, the slave trade industry kept detailed and extensive records.  Upon investigating many of the specific details about slavery in the novel, Hill’s research becomes evident.  The description of the slave ship Aminata travels on is a perfect example of the type of authenticity Andrew Beahrs describes [1]:

Everywhere I turned, men were lying naked, chained to each other and to their sleeping boards, groaning and crying. Waste and blood streamed along the floorboards, covering my toes…Piled like fish in a bucket, the men were stacked on three levels—one just above my feet, another by my waist and a third level by my neck…The men couldn’t stand unless they stooped—chained in pairs—in the narrow corridor where I walked. On their rough planks, they had no room to sit. Some were lying on their backs, others on their stomachs. They were manacled at the ankles, in pairs, the left ankle of one to the right ankle of the other. And through loops in these irons ran chains long enough for a man—with the consent of his partner—to move only a few feet, toward the occasional cone-shaped bucket meant for collecting waste. (63-64)

The passage above is an example of Hill’s authenticity in the novel.  Details like the exact location of the chains on the men’s ankles and the horrific conditions match descriptions found in history books.

Very few firsthand accounts exist describing life as a captured African aboard the slave ships, but Equiano shares the collective experience of many Africans in his memoir:  “The closeness of the place, and the heat and the climate, added to the number in the ship, which was so crowded that each had scarcely room to turn himself, almost suffocated us.  This wretched situation was again aggravated by the galling of the chains, now become insupportable.”  As Carretta concludes in Equiano, the African: Biography of A Self-Made Man, the memoir is enhanced by the apparent fabrication because Equiano becomes the voice of the voiceless.  While he might not have experienced firsthand a slave ship, the power of his written voice moved people into action.  His purpose was to tell the truth of slavery, and whether or not he experienced every single gruesome detail is irrelevant in the end.  In order to tell the truth, Equiano needed to move outside the lines of personal history for an authentic representation of the entire slave journey.

In the same way, Hill romances history in order to tell the overall truth of the slave trade; the detailed and fictional accounts of Aminata’s thoughts and feelings humanize an often number-based representation of history.  Someone Knows My Name fleshes out the skeleton  that history books give us; Aminata’s journey resonates because she is human.  We can picture the young girl raped and forced to carry on working as if nothing happened (Hill 161) in a way not permitted through the statistics presented in textbooks.  Using Aminata’s life as a framework, Hill demonstrates the devastating effects of each part of the slave trade industry.  The novel exists successfully in the realm of historical fiction because Hill balances authenticity with accessibility and creates an accurate portrayal of life as a slave and, subsequently, the freed slave.  The familiar human emotions of fear, love, and hope enhance the experience and are not outweighed by the strange elements, like slavery or life in the 1700s.  Delicately interwoven with fact, the romance of history in Someone Knows My Name brings to life a difficult and often obscure part of history.  Hill’s novel is a work of historical fiction that reveals more about historical events than any textbook ever could.

Marisa Zhuño graduated with a B.A. in English from Kennesaw State University in 2013.