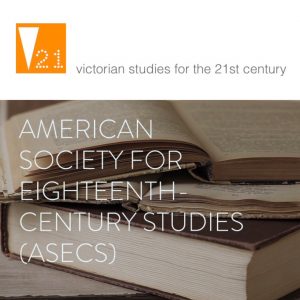 For the 2018 American Society for Eighteenth-Century Studies (ASECS) conference program, Katarzyna Bartoszynska and Eugenia Zuroski circulated the following call for contributions to a roundtable responding to the V21 Collective’s intervention in nineteenth-century studies and the possibilities it presented for reflecting on current problems and critical approaches in eighteenth-century studies:

Launched in 2015, the V21 Collective aims to invigorate the field of Victorian Studies by calling for more “speculative and synthetic methods”; new formalisms and presentisms; and a willingness to theorize. Critiquing the tendency towards positivist historicism, V21 urges a renewed engagement in the question of how we relate to the past. It also interrogates the forms of institution that structure the field, modeling alternative approaches to collective thinking, by, for instance, assembling Book Collations in place of the standard book review.

This roundtable asks whether C18 studies are in need of a similar movement, inviting us to take stock of our own disciplinary habits and formations. What is our relationship to historicism, to form, to theory? What kinds of institutional frameworks and platforms do we use? Do C18 studies share the problems that V21 finds in Victorian studies, or do we model alternative approaches? Which commitments—disciplinary, theoretical, political, methodological—are we prepared to renew, and which to rethink?

We invite brief reflections to initiate a discussion of how we understand the affordances of C18 scholarship in the 21st century. We strongly encourage PhD candidates and junior scholars, as well as more senior colleagues, to submit abstracts.

The roundtable featured brief talks by five scholars—Stephanie Insley Hershinow, Travis Lau, Sandra Macpherson, Jonathan Kramnick, and Laura E. Martin—plus a response from Anna Kornbluh on behalf of V21. We have gathered four of the five talks here, with a reflection on the conversation by the co-chairs.

Forster imagines the British Museum reading room as populated by the great authors of the English novel, paired at tables in a kind of formalist buddy system–synchronism that offers a model for thinking about the novel without the silos of periodization.

The urgency to act and respond in our current turbulent political climate is born out of the fact that we as humanists do know where things are headed precisely because we work to understand how and why events in history have unfolded as they have.

The “Ordinary Science” of Literary Studies

In order for race (and racism) to be unraveled in the present, we have to recognize that it wasn’t always like this, that race was not a settled, congealed category in the worlds of (especially early) 18th-century texts.  Distance and difference are necessary in our present in order to understand the past, the present itself, and to work for a different kind of future.

What are the best ways to produce future collaborations, not only across V21 and eighteenth-century studies, but broadly across various fields and emergent collectives? Whether or not we organize a “V21 for the C18,” how might we best provide space for active collaboration across not only periods but also differentials of institutional power?