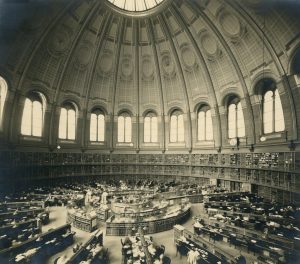 In the preface to The Rape of Clarissa, Terry Eagleton embraces, under the sign of Benjamin, a strategic presentism (though this is not his phrase) that understands the work of criticism to be a kind of textual recovery.  Literature long thought unreadable can, under the critic’s care, be revived for a new readership if we can only see how it speaks to the politics of the present moment.  This is what I take Eagleton to mean when, writing in 1982, he claims, “we may now once again be able to read Samuel Richardson.” [1]

Eagleton’s “we” who are newly able to read Richardson surely refers not to scholars of the eighteenth century—who had, of course, been reading Richardson all along—but to a more capacious, perhaps even a non-academic readership.  And “read” means something bigger, too.  Again, eighteenth-century scholars had been reading Clarissa, but not in a way that took its project seriously, not in a way that understood its urgency.  In bringing Clarissa back from the dead, Eagleton opposes his method to a conservative historicism:  “I entirely lack what would appear to be one of the chief credentials for discussing the eighteenth century,” he writes, “namely a nostalgic urge to return to it.” [2]

Eagleton can seem almost prophetic now:  he either divined correctly that the world was ready again for Clarissa or, along with Terry Castle and, not much later, Frances Ferguson (among others), he made it ready.  But I begin with him not because I see him as the first to release this salvo but because I want to suggest that there has long (perhaps always) been an eighteenth-century studies that has situated itself against a more conservative, historicist eighteenth-century studies.  This is perhaps why many of us were so thrilled to read the V21 Manifesto when it was published:  we greeted its writers less as provocateurs than as fellow-travelers.  I offer a capsule pre-history of strategic presentism not to suggest that it has run its course but to propose what I hope we might consider as a friendly competitor in the push against the kind of conservative nostalgia Eagleton names.  If, as the manifesto claims, “the variations of and alternatives to presentism as such have not yet been adequately described or theorized,” I hope to offer an early step toward that effort here.

Rather than (or perhaps alongside of) strategic presentism, I’ve been thinking lately about a model of synchronism (maybe even a naïve synchronism) that would allow for connections between moments of historical time without even the minimal historical apparatus that presentism requires.  In one of the early responses to the V21 Manifesto, David Kurnick urges us to revisit old formalisms before we craft new ones, and, in that spirit, I want to suggest that one valuable old formalist contribution to our present critical conversation is E. M. Forster’s curious synchronous thinking about the novel’s form. [3]  Here’s a brief passage from a part of Aspects of the Novel that no one really reads:

We are to envision the English novelists not as floating down that stream which bears all its sons away unless they are careful, but as seated together in a room, a circular room, a sort of British Museum reading-room—all writing their novels simultaneously. They do not, as they sit there, think, ‘I live under Queen Victoria, I under Anne, I carry on the tradition of Trollope, I am reacting against Aldous Huxley.’  [4]

Forster imagines the British Museum reading room as populated by the great authors of the English novel, paired at tables in a kind of formalist buddy system.  The pairings that Forster conjures with his thought experiment (Richardson and James, Dickens and Wells, Sterne and Woolf) may strike us as rather obvious, but the experiment itself is not.  Our understanding of novel theory has, perhaps since its inception, been inextricably linked to an historical account of the novel’s emergence and development, however contested the parameters and particulars of that history may be.  Consider the ubiquity of the pairing “the history and theory of the novel” in both our scholarship and teaching, or the subtitle of the most commonly assigned anthology in the subfield:  Michael McKeon’s The Theory of the Novel:  An Historical Approach.

While much new formalist work on novel theory has advocated either for new histories or for a strategic presentism that simply runs history in reverse, Forster offers a formalist literary history without the history.  Forster posits a view of the English novel as simultaneously generated—a flattening not of character but of time.  It subordinates temporality as such to the spatial, enabling, I think, what Anna Kornbluh has called, “enhanced attention to the worldmaking project of fictional space and to literary realism as the production of possible spaces rather than the document of existing places.” [5]  (Indeed, I suspect that Forster’s model might do this better than presentism).

In writing at a table alongside Forster, I’m not claiming to invent anything, but I do want to connect and elevate work as diverse as that of Susan Sontag (see “Notes on Camp”:  especially her use of lists that can commingle, for example, Walpole, Wilde, and “stag films seen without lust”), James Chandler, whose An Archeology of Sympathy pings from Frank Capra to Laurence Sterne to I. A. Richards, and Scott Black, whose writing on romance and anachronism takes up what he has called “a looser sense of history.”  The affordances of synchronism are, in brief:

1.)  it offers a less abashed formalism.

2.)  it opens up the potential for a kind of cross-period collaboration that is truly rare in our discipline.

3.)  it leverages so much of the work that we already do, in our classrooms especially, but also in the kind of irreverent, energetic (semi-)public writing that is flourishing at the moment, both in venues like The Hairpin (RIP), The Toast (RIP), and the LA Review of Books but also ABOPublic and The 18th-Century Common.  And this is perhaps especially true for our colleagues in the precariat, our graduate students and adjunct faculty, who are constantly being called to extend outside of narrow training, to bring their expertise to bear more broadly than ever.

In sum, I want to suggest that Forster’s synchronism offers a model for thinking about the novel without the silos of periodization, at a moment when we’ve largely embraced formalist methodology only up to the limits of established, field-based historical parameters.  It doesn’t encourage us to abandon the eighteenth century, but instead offers us an eighteenth century not just for the present, but for all time and all possible futures.

For the 2018 American Society for Eighteenth-Century Studies (ASECS) conference program, Katarzyna Bartoszynska and Eugenia Zuroski chaired a roundtable responding to the V21 Collective’s intervention in nineteenth-century studies and the possibilities it presented for reflecting on current problems and critical approaches in eighteenth-century studies.  Additional contributions to the roundtable can be found here.