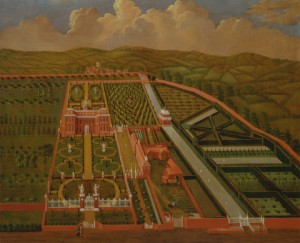 In the late seventeenth century, the philosopher Epicurus and his garden made a comeback in England. Natural philosophers looked to his arguments about atomic swerve to understand the cosmos, and translations of Lucretius’s On the Nature of the Universe, the primary classical source for dissemination of Epicurus’s ideas, went through multiple English translations by a diverse group of enthusiasts, including, among others, the Puritan, Lucy Hutchinson; the Restoration court writer and poet laureate, John Dryden; the diarist, John Evelyn; and the most prolific of the translators, Thomas Creech, praised by Aphra Behn for making Lucretius available to English readers.

At the center of Epicurean philosophy lies the garden, a symbol for Epicurus’s philosophical ideal of ataraxia, or tranquil pleasure. It is perhaps not surprising that the tumultuous years of civil war and regicide (1640s); the Restoration (1660); plague (1665); fire (1666); and several wars with the Dutch (1650s-70s) would have produced renewed interest among the English in Epicurean philosophy, which argued for retreat from chaos and politics, always unstable, whether in ancient Rome or late Stuart London. The seventeenth century was perhaps a good time to stay in one’s English countryside garden and tend the roses.

Sir William Temple’s essay, “Upon the gardens of Epicurus, or, of gardening in the year 1685,” offers practical advice and best practices for growing plants in England and describes other gardens around the world. In Temple’s world, virtuous philosophy cultivates virtuous vegetation, and Temple is most interested in the nutritious and sweetest fruits with the greatest health benefit. He takes particular interest in the natural plants that counter poisons. The perfect garden provides the simplest nourishment, which Temple advises is the best diet, cautioning the reader against too much meat and wine. We might do well to follow some of his advice today.

The physical garden was to Temple and other Epicureans a reflection of  one’s mental landscape, and in the best of all possible worlds, one would stay in the garden–a position that Voltaire would later and more famously endorse in Candide. That is, if duty–a Stoic ideal of virtue–didn’t intervene. An important statesman, Temple negotiated the Triple Alliance, taking an active role in Charles II’s government until he followed Epicurus’s advice and retired to his own garden. He praises retirement as a philosophical mode in his “Upon the gardens,” and he defends Lucretius from detractors who attacked him for atheism. One of the ancients, Lucretius rightfully belongs among the ranks of Homer, Virgil, and Horace, classical writers revered in the period. Lucretius, Temple argues, was no more or less pagan than they were and deserves equal admiration.

Members of the Royal Society took Epicureanism seriously in their investigations of the body and soul. Temple, however, disliked natural philosophy. In “Upon the gardens,” he does not endorse Lucretian atomism to understand the body or the soul. The era saw tremendous advances in medicine, including Thomas Willis’s discovery of the cranial nerves, still called the “Circle of Willis,” and debates about the operation of the ‘animal spirits,’ those invisible forces thought to flow through the nerve pathways and link a higher with a lower soul. The eclectic physician and natural philosopher Walter Charleton, among others, connected the animal spirits to Lucretian atomism. Temple thought this was not the business of mankind. We might hear Alexander Pope’s Great Chain of Being swinging off in the distance.

Temple most admired Lucretius’s arguments for retreat into a natural space where even the poorest of humans might experience the noblest of tranquil virtues, thereby rivaling or surpassing kings in the simple acts of growing, weeding, planting, and reaping. Though a Royalist, Temple makes a subtle argument in his “Upon the gardens” for the equality of mankind. In other essays, he advocates for peace over conflict, lauding the virtues of a well-functioning government over the glory of war. This in a period that saw England’s greatest imperialistic expansion and many English translations of epics. Temple suggests the inferiority of Homer and Virgil, who depict epic deities with the worst human qualities enacting the basest schemes against mortals, to Lucretius, who argues against their existence. Though at other times sounding strongly Christian, Temple here seems to endorse Lucretius’s ideas, which led some critics to accuse him of atheism.

The idea of Epicureanism as a state of virtuous tranquility or simple living has not survived in popular understandings of the word “Epicurean.” It became associated with a pleasure ideal followed by Charles II’s court libertines, who misused the term in writing about their sensory pleasures. It was precisely these sorts of pleasures that Epicurus and Lucretius discouraged their followers from pursuing. They argued that it disrupted the mind and caused unhappiness, frustration, and depression. Lucretius spends an entire book (Book 4)–which Dryden translates in Sylvae–in On the Nature of the Universe in dissuading humans from sexual promiscuity along with other excesses, including gluttony. Ironically, a Google search of the term “Epicurean” will yield more results for food, wine, and kitchen products than it will for anything Epicurus or Lucretius valued–friendship, moderation, and gardening–all pursuits cultivating virtue and the life of the active body and mind.

That is not to say that Epicurus or Lucretius disavow all sensory pleasures, and the garden Temple describes is abundant with procreative purpose. He genders certain plants as strong and masculine and describes the eroticism of the plants, redefining the idea of sensuous experience in an age when debauchery still ruled the court. In Temple’s garden, all sorts of pleasures await the senses. Birdsong ravishes the ears; fruits tantalize the eyes and noses; the texture of plants and fruits roughen, nuzzle, or prick the skin; and exotic oranges, ripe cherries, and perfect apples sweeten the tongue. Temple’s Eden is an erotic space where Adam and Eve once played and “worked” happily together. These organic pleasures are subtle and require finely tuned senses rather than the baser ones the notorious rake, John Wilmot, the Earl of Rochester, refines in his poetry.

The film The Serpent’s Kiss (1997, directed by Philippe Rousselot), is set during the reign of William III in 1699 and dramatizes some of Temple’s ideas. A Dutch landscape gardener, Meneer Chrome (actor Ewan MacGregor) arrives to the English countryside to design a garden for a pretentious would-be gentleman, Thomas Smithers (actor Pete Postelthwaite), who desires a garden for his vain and adulterous wife, Juliana (actress Greta Scacchi). The daughter of the house, Anna, who renames herself Thea (actress Carmen Chaplin), opposes the planned garden and seems to command the wind to destroy it. She filters her world through the lens of Andrew Marvell’s poetry, wanting only the wild natural world to fill her senses. Her parents’ lifestyle seems to drive her mad, and her father nearly has her committed, treating her “unnatural” obsession for the outdoors as a form of madness requiring several tortuous treatments. She eventually elopes with the gardener, literally throwing out her poetry book. Both Meneer and Thea/Anna embrace the idea of a natural Edenic world and an uncontrived life.

Though Temple rejects the vanity that Smithers and Juliana represent, he saw the patterned garden as an expression of reason, anticipating the magnificently complex gardens of the eighteenth century. Like seventeenth-century definitions of wit, Temple’s philosophy of the garden expresses a balance of judgment and fancy, those gendered faculties of the mind, and an appropriate blend of reason and passion. The act of gardening for Temple was the practice of freeing the self from the disordered passions, unavoidable but capable of being subdued like wild weeds. One needs only a patch of earth, a shovel, and a life of the mind.

Laura Linker is Assistant Professor of English at High Point University. She is the author of Dangerous Women, Libertine Epicures, and the Rise of Sensibility, 1670-1730 (Ashgate, 2011).

4 thoughts on “Cultivating Philosophy in the Epicurean Garden”