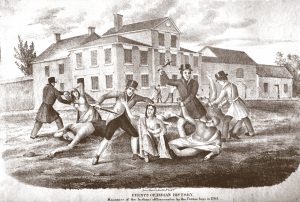 Will Fenton is the Director of Scholarly Innovation at the Library Company of Philadelphia and the Creative Director of Redrawing History: Indigenous Perspectives on Colonial America (The Pew Center for Arts & Heritage). He earned his Ph.D. from Fordham University in August 2018 (Department of English).