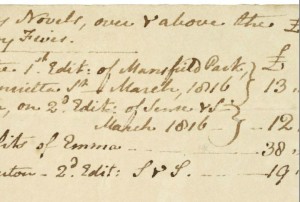 Detail of Jane Austen’s autograph note concerning the “Profits of my Novels, over and above the £600 in the Navy Fives” ca. March 1817. The Morgan Library and Museum.

Jane Austen was born on December 16, 1775, and we want to highlight a few items around the web marking the occasion: