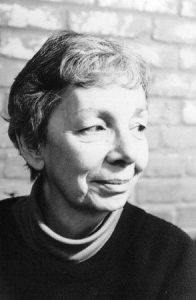 Janet Lunn, a writer of historical fiction for young people and a strong advocate for the importance of children’s literature, ruefully claimed that it was not an esteemed occupation. But her description of the arduous, two-year process that went into her books establishes that she did not distinguish between texts for children and adults. When asked why she wrote for children she said that “my head is full of stories, and when I write them, they always turn out to be for kids.” Her books contains those necessary tugs between authenticity and accessibility, the familiar and the strange, that create the special brew that we expect when we pick up any historical novel. She follows the classic method of describing major historic events in North American history in terms of small communities and individual lives.

Born in Texas, she spent most of her childhood in New England and moved to Canada to attend Queen’s University. She spent the rest of her life there, much of it in an eighteenth-century house in Hillier, Prince Edward County, Ontario, where some of her writing is set. According to the obituary in the Globe and Mail, most of her working life was dedicated to children’s texts, as a writer, a book reviewer, and the first children’s book editor for Clarke, Irwin and Co. She was a founder of the Writers’ Union of Canada, which she led from 1984-1985, the first children’s writer to do so.

She writes that British children’s author Rosemary Sutcliff created myth through attention to both historical detail and the specific characteristics of place, a description that applies equally to herself [1]. Her Hawthorn Bay trilogy, comprising The Hollow Tree (1997), Shadow in Hawthorn Bay (1988), and The Root Cellar (1981), follows the fortunes of a community initially torn apart by the American Revolutionary War, through the settlement of the Loyalists in southeastern Ontario, the arrival of Scottish immigrants, the American Civil War, into the present. The inclusion of A Rebel’s Daughter: The 1837 Rebellion Diary of Arabella Stevenson and the biography of Laura Secord, an iconic War of 1812 figure, creates a path through Canadian history’s formative events, from the American Revolution to within a few years of Confederation, comparable to Sutcliff’s novels about Roman and Saxon Britain. 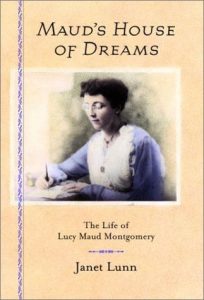 The first two books, which are most relevant to The 18th-Century Common, are typical: she does not hide the conflicts of the past, create false heroes, or sugarcoat her characters. Maud’s House of Dreams: The Life of Lucy Maud Montgomery, describes the difficulties of the motherless girl’s childhood, her fraught relationship with her stepmother, an engagement that she realizes is a mistake, and her grandmother’s declining health: “She may have been in the early stages of senility or Alzheimer’s Disease…but all that Maud knew was that she was very difficult” (126). 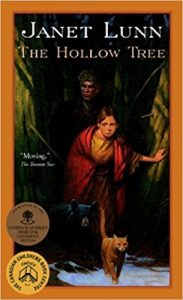 The Hollow Tree is set in New England at the beginning of the Revolutionary War. The rupture in familial and social relationships caused by competing loyalties to the Crown and the nascent United States are depicted through the experiences of Phoebe Olcott, the daughter of a Patriot, who, after his death, goes to live with her Loyalist relatives, the Robinsons, in a small town in Vermont, where the Loyalists are in the minority. Deborah Williams, whose husband, John, is rumored to be fighting on the British side, and her four children are dragged from their house in the early hours of the morning, forced into their oxcart, and sent away with a few possessions; a prized family clock is stolen from the cart. When Deborah protests, “Where will we go? We’ll starve!” the ringleader replies, “Starve if you must…that ain’t no never mind of ourn” (22). Meanwhile, Phoebe learns that her beloved cousin, Gideon, is a spy for the British. The next morning, his body is found hanging from the “Liberty Tree”:  “On his shirt a note was pinned. It read ‘Death to all Traitors and Spies’” (32). Her cousin Anne attacks her: “You did this. You and your father and his rebel friends!” (33). Bereft, she visits the place where she, Gideon, and Anne used to meet. Reaching into a hollow tree where they had left messages to each other, she finds a packet “addressed to Brigadier-General Watson Powell, at Fort Ticonderoga.” The packet is wrapped in a paper directing that, should Gideon be captured, it should be delivered to the Mohawk leader, Elias Brant (35-36). The text is in code, but it contains an uncoded request for safe passage for three New York families, the Collivers, the Andersons, and the Morrisays.

Thus begins Phoebe’s long and dangerous journey, which finally ends in Canada amongst the expatriate Loyalists. Along the way, she is befriended by Peter Sauk, a First Nations man, and his family; she exchanges her own clothing for his sister’s so that she can travel through the woods more easily. She is robbed by both rebel and British soldiers, and she concludes that the signature of war is that it causes good and decent people to do terrible things to each other. Nor does she absolve herself. When she first meets the Loyalists, who have left the town shortly after herself, Anne still holds her responsible for Gideon’s death. Thus she does not tell any of them of their mission. But when they are reunited and Anne wonders why Phoebe did not ask for her company on the mission, Phoebe realizes that “[i]n fact, … she had never considered Anne’s thoughts or feelings about anything” (196). The reconciliation of Patriot and Loyalist, and Phoebe’s marriage to Jem Morrisay, are the foundations for the new community in Upper Canada. 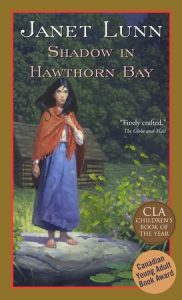 Shadow in Hawthorn Bay pulls together three of the dominant cultures in the settlement of Upper Canada: the First Nations, the Loyalists, and the Scottish immigrants. It takes place in 1815-1816, three years after the War of 1812. In her brief biography, Laura Secord: A Story of Courage, Lunn explains, “Neither the British nor the Americans won the war. The only people who really won were the Canadians. The boundary lines between British North America and the United States remained unchanged” (n.p.). One of the characters in Shadow in Hawthorn Bay, who arrived there as a child, describes it more personally: “Then, when we hadn’t more than just gotten ourselves settled into these backwoods—not quite thirty years later—didn’t those old Yankee neighbours come along and start another war! They thought they’d kick us out of here too. Well, I guess they got a surprise!” (105-106).

The protagonist, Mary Urquhart, from the Scottish Highlands, hears the call of her cousin Duncan Cameron through her “two sights,” and she sets out on a hazardous passage over the Atlantic to the settlement in what is now southeastern Ontario. When she arrives, she discovers that her relatives have just left, and Duncan is dead. She settles uncomfortably into the Loyalist community, which includes Phoebe and others from the previous book. They have no patience with her strange Highland ways and reject the idea of the second sight. When her prediction that there will be no summer comes true, some of them accuse her of causing those events and remove their children from the school where she teaches. They distrust her for being on good terms with the First Nations people, in whom she sees many of the characteristics of the Highlanders, especially their quiet speech and knowledge of the medicinal properties of local plants.

By incorporating Mary’s “two sights,” Lunn aligns with Walter Scott’s claim that the supernatural is appropriate when it represents the cultural norms of a novel’s setting. Lunn presents these visions as true for Mary and a cause of fear and skepticism in the community dominated by pragmatic English descendants. The story also presents the dark side of early settlement life: the whiskey-fueled rape of a young woman; the mother whose infants die of neglect while she retreats into alcoholism.

In the Quill and Quire review of The Hollow Tree, Sarah Ellis remarks that “In language and in her portrayal of attitudes, Lunn pays her material and her readers the respect of recreating a time that was genuinely different.” Lunn fulfills the purposes of  both historical and young adult fiction, focusing on a young protagonist as she learns about herself and a world that is both recognizable and different from our own.

Books by Janet Lunn referred to in this piece:

Martha F. Bowden's book publications are The Reform'd Coquet, Familiar Letters Betwixt a Gentleman and a Lady, and The Accomplished Rake, an edition of three novels by Mary Davys (Kentucky, 1999), Yorick's Congregation: The Church of England in the Time of Laurence Sterne (Delaware, 2007), and Descendants of Waverly: Romancing History in Contemporary Historical Fiction (Bucknell University Press, 2016). She is a Professor of English at Kennesaw State University.