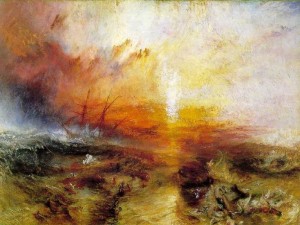 “The Slave Ship” or “Slavers Throwing overboard the Dead and Dying—Typhoon Coming on.” J.M.W. Turner, 1840. Museum of Fine Arts, Boston.

The concept of Africa as a unified region whose inhabitants share a common identity developed alongside the transatlantic slave trade of the eighteenth century.  Europeans thought that the group of people they purchased and exploited (despite their vast cultural differences) belonged to a common group because of their social position.  This position was at first justified by theories of climate.  (They erroneously believed that people from “the torrid zone” could withstand hard labor in harsh climates better than those from more temperate zones.)  Gradually this inferior social position became known as that of “Africans,” which means that ancestry, geographic origin, and common physical traits became intertwined and began to define an entire group of people.  In this post, I examine, through the example of early Haiti (which was known as Saint-Domingue until 1804), the influence of a European understanding of Africa that erased nuances between different cultures.

When many twenty-first-century Americans hear the term “eighteenth century,” they might think of the beginning of the United States, the Enlightenment, or perhaps the French Revolution.  Artificial divisions between Western and non-Western histories mean that many of us learned a one-sided story about what happened in the Americas in the eighteenth century and do not often think of the many interactions between Europeans and people of other regions that happened during the time.  Sure, most of us know about the transatlantic slave trade, but we still do not often think of it as a period of contact that involved two active (albeit unequal) participants:  the slave master and the slave.  Henry Louis Gates describes what developed out of these interactions as a “veritable seething cauldron of cross-cultural contact” (4).  This “seething cauldron,” this place where cultures mixed violently, unequally, and even sometimes harmoniously, gave rise to the first successful slave revolt in the Americas.  The eighteenth century did not just end with the French Revolution, but rather with the birth of Haiti, the first black republic, and the first postcolony in the world.

Laurent Dubois, a well-respected historian of Haiti, has noted that the Haitian Revolution was an African revolution (5).  Indeed, two-thirds of the enslaved people living in Saint-Domingue at the end of the eighteenth century were born in Africa.  Beginning in the late 1780s, debates about the rights of three classes of people began in Paris:  the enslaved, the gens de couleur (free people, mainly of both European and African ancestry), and slave owners.  A lobby of slave owners known as the Club Massiac proved particularly unwilling to budge on rights for anyone with African ancestry in Saint-Domingue.  By 1791, the enslaved population took matters into their own hands and began to revolt.  Just two years later, the French commissioner Léger-Félicité Sonthonax abolished slavery, which was made official for all French colonies in Paris in 1794.  Napoleon’s troops, however, returned to Saint-Domingue in 1801 to reestablish slavery.  They were defeated at the Battle of Vertières in November of 1803, and Jean-Jacques Dessalines (1758-1806) declared the independence of the nation of Haiti (from the Arawak name for the island) on January 1, 1804.

As early Haitians were carving out a position for themselves independent of one of the most powerful colonial empires of the time, they had to assert their equality as human beings and their unity as a nation.  This required a rather complicated philosophical and rhetorical manoeuver that is the subject of this post:  early Haitians had to claim that this identity known as “African”—a label that the French gave them—did not denote inferiority.  At the same time, they were not all one homogenous group known as “Africans.”

People arguing against extending the Declaration of the Rights of Man and Citizen (1789) to people of African descent in the colonies used the term “African” to highlight that these people were foreign, different, not French and therefore excluded from access to rights.  In this moment, we can see that “African” began to take on a meaning that included anyone with non-European ancestry in the colonies (i.e., people whom French colonists wanted to omit from the new doctrines of freedom espoused by revolutionaries).

Early Haitians argued that they were equal to the French, despite the negative use of this term “African.”  Yet while “African” was a term that they sometimes championed as they were asserting their humanity, it did not achieve a sense of solidarity among the varied population of eighteenth-and early-nineteenth-century Haiti.  The eighteenth-century Creole colonist and writer M.L.E. Moreau de Saint-Méry mentions the large number of different peoples represented among “the black population” of the colony.  In his work, distinctions between Africans in Saint-Domingue were glossed, detailed, and translated for those unfamiliar with the colony.  A new site developed by the French Atlantic History Group that contains advertisements for runaway slaves shows the diversity of people living in late eighteenth-century Saint-Domingue.  Slaves were described as belonging to the Nago, Congo, Senegalese, Gold Coast, Tiambo, and Arada “nations,” just to name a few (“nation” meant “group” in this context).  During the Haitian Revolution, these “nations” did not always fight together and division existed among different cultures (Jenson 620).  In addition to the diversity present among people born in Africa, slaves born in the colony (Creole) were often of a higher status than those who had survived the Middle Passage (Bossale).  The population also included people of both European and African ancestry (often the result of consensual and non-consensual relationships between masters and enslaved women).  These gens de couleur were often of a higher class and sometimes owned slaves themselves.

What it meant to be African or from Africa in Saint-Domingue at the end of the eighteenth century was complex and multifaceted, which means that in early Haiti vindicating the rights of a group of people based on their common African origin was not easy or even particularly effective.  If we examine some of the earliest writing by Haitians—their governmental documents—we see that in order to argue for Haitian national unity, the Declaration of Independence never refers to “Africa.”  “Africa” actually meant division and was counter to their vision of a new nation.  In a similar manner to Europeans, the authors (Jean-Jacques Dessalines with the aid of his secretary Louis Boisrond-Tonnerre) left Africa out of discussions of identity, but not because they thought of Africans as a unified block.  It was precisely the opposite.  For them, being reminded of Africa might distract Haitians from the new national identity that they wished to form.  If anything, the unified block had to be comprised of Haitians—a new category that Dessalines would, in his 1805 constitution, define as “black.”  By associating “black” with nationality rather than with physical traits, Dessalines challenged a developing negative conception of “race” that the Europeans were creating.  Dessalines made “black” a political project of independence.

Studying the eighteenth century, and Haiti in particular, helps us see how the meaning of the term “African” developed within the context of the institution of slavery.  This institution classified its victims based on physical traits that were common to people from a vast region that originally had been categorized only by its climate.  In the Americas, it was what this population had in common—their unfortunate position as enslaved peoples—that defined them as a group; physical traits came to represent this position.  Slavery created racial difference.

It takes philosophical argumentation to combat stereotypes that deny our freedoms as individuals.  Early Haitians contributed to eighteenth-century Enlightenment thought on freedom and human rights by challenging and redefining the categorizations set up for them by a hostile colonial ruler. They were some of the first postcolonial philosophers and provide us with a powerful example of how categorizations are ever-evolving ways of conceptualizing the world that should be considered critically and challenged accordingly.

One thought on ““African” in Early Haiti, or How to Fight Stereotypes”