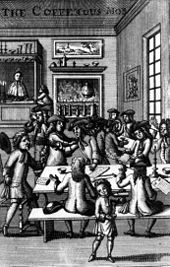 We’re excited to announce new ways to get involved with The 18th-Century Common, the public humanities website for nonacademic, nonstudent enthusiasts of 18th-century studies.

In Gazette posts, scholars or students situate recent publications by others—whether in academic or popular media—in scholarly contexts.  Gazette posts show how a recent publication participates in the conversations of eighteenth-century scholarship (see, for example, Cassandra Nelson’s Gazette post on a BBC article by Adam Gopnik about the “Mechanical Turk”).  We’re using the content curation plugin PressForward to generate topics for Gazette posts.  PressForward enables 18th-century enthusiasts (nonacademic or academic!) to nominate content from around the web for inclusion in 18th-Century Common Gazette posts by posting a link on Twitter with the hashtag #18common.  We also use PressForward to collect abstracts of new journal publications for possible Gazette posts.  We encourage faculty to incorporate the writing of Gazette posts into their graduate seminars or advanced undergraduate classes.  Writing a Gazette post gives students practice situating work in scholarly contexts as well as practice communicating ideas clearly to an intelligent, nonacademic readership.  Gazette Contributors will have access to a range of possible material for Gazette posts gathered by PressForward; a Gazette Contributor may choose the topic of a post from this material or from other publications.

Read more about these ways of getting involved in The 18th-Century Common:  our Get Involved page includes tutorials on nominating content with the Twitter hashtag #18common as well as on using PressForward to create Gazette posts.  Contact the editors at [email protected] with questions, proposals for Features or Gazette posts, interest in serving as (or assigning your students to serve as) Gazette Contributors, or interest in becoming a Collection Curator.