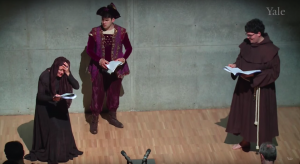 Georgina Crisp as the Countess of Narbonne, Gilberto Saenz as Florian, and Charlie Gillespie as Friar Benedict in the staged reading of Walpole’s The Mysterious Mother

As soon as I was invited to play the Countess, I felt the adrenaline rush I usually feel before going on stage. What a role for a woman of a certain age!  An aristocrat who has a daughter by her son and usurps, by the standards of the time, his right to rule the Duchy – all based, allegedly, on a real French mother. I love playing transgressors and Walpole made me feel for the Countess because she is eaten by guilt and threatened by conniving clerics.  However, I was nervous – having spent at least ten years reading, watching and talking about drama, instead of performing it. Moreover, I’ve performed way more comedy than tragedy, but it would do no justice to Walpole to play the eloquent script for blackly humourous laughs… even if the audience spotted them. My character had to take herself seriously. I think we all felt like that about our characters. 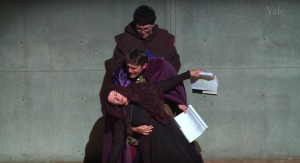 Georgina Lock as the Countess of Narbonne, Carlos Guanche as Count Ormond, and Charlie Gillespie as Friar Benedict in the staged reading of Walpoles’s The Mysterious Mother

The Countess is a very physical character and I enjoyed locating her in my own body – standing tall to express status despite her gut sickening at what she constantly remembers doing. The more I read the script and looked inside her lines, the more I could believe her extreme actions – and Misty and the cast egged me on to express them. The short rehearsal and deadline added to the urgency and “now or never” fun… although I must say I would love to do it again.

Georgina Lock is Senior Lecturer at Nottingham Trent University. She researches and has presented a number of conference papers about the history of theatre and actors. Currently, she is interested in performance styles and female performers, especially of the 18th Century. Dr. Lock worked for ten years in the professional theatre, writing, acting and directing and occasionally producing. She has also worked as a screenwriter and produced a film along with directing two of her screenplays. These screenplays are Short White Pleated, about the empowerment of cross dressing and a favourite at international film festivals, and The Pick Up, a short film about female terrorism.