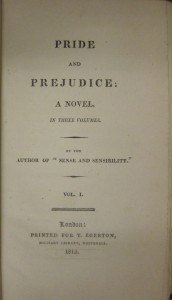 Jane Austen scholars are currently marking the 200th anniversary of the publication of Pride and Prejudice.  Here are just a few of the many commemorations from around the web:

Devoney Looser, in an essay for the Los Angeles Review of Books, reviews two recent scholarly books that attempt to make sense of Austen’s enduring appeal:

The permeable boundaries between the popular and sometimes absurd Austen and the scholarly Austen surely matter in ways that will be long in unraveling. Recent Austen scholarship has capitalized on this high-low traffic, mirroring the marketing of “I [Heart] Darcy” bumper stickers more than we might like to admit — and I don’t exempt myself from the charge of opportunism. I am an English professor who has the good fortune to teach Jane Austen by day. By night, I skate on the local roller derby team as my alter ego, Stone Cold Jane Austen. As a result, I regularly field such farcical questions as “What would Jane Austen think of tattoos?” and, from my son, “Mommy, who is Jane Austen? Are you Jane Austen?” So I do not speak here from on high. The shrines to Jane Austen in my life involve sweat-stained wrist guards, not 19th-century editions of her works. But even I find myself asking on occasion, “What is the point of our sifting through and documenting all of today’s Austen-infused dreck?” It is especially heartening, then, to find emerging work on Austen and popular culture that moves beyond recounting how she has been mashed up with zombies, vampires, or porn. The best new work asks not only the multivalent, unanswerable question, “Why Austen? Why Now?” It also carefully charts “How did we get here?”

Both Claudia L. Johnson’s Jane Austen’s Cults and Cultures and Janine Barchas’s Matters of Fact in Jane Austen: History, Location, and Celebrity are exemplars of this more sophisticated work on Austen and popular culture. Johnson’s book makes sense, directly and indirectly, of the factual-fiction impulse behind novels like Pattillo’s Jane Austen Ruined My Life, telling the fascinating story of how the mystique of Austen was gradually created, maintained, and spun out in unpredictable ways in the years after her death in 1817. Johnson unearths both the many-sided truths and the wide-ranging implications of our false fantasies of Austen, drawing conclusions from evidence ranging from portraits and memorials to fairy tales and relics. By contrast, Barchas makes a compelling case for our acknowledging some of the real-life 18th- and 19th-century people who may stand behind Austen’s fictional characters, in order to reveal long occluded ways of seeing Austen’s relationship with history and celebrity culture.

Elsewhere in the Los Angeles Review of Books, Susan Greenfield and Audrey Bilger offer an engaging account of the fate of Pride and Prejudice over the past 200 years, and Ted Scheinman reviews a new biography of Austen.

In 2006 Linda V. Troost published an analysis of three film interpretations of Elizabeth’s visit to Pemberley in Eighteenth-Century Fiction.  You can read the entire article without charge here.