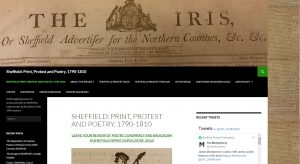 Sheffield:  Print, Protest and Poetry, 1790-1810 is an ever-growing digital anthology of protest poetry printed in Sheffield’s radical press at the end of the eighteenth century.

Directed by Dr. Hamish Mathison and researched by Dr. Adam James Smith, the anthology was born of an AHRC-funded cultural engagement project focusing on the full collections of The Sheffield Register (1787-1794) and The Sheffield Iris (1794-1825), newspapers held in University Library Special Collections.  The Register was edited by Joseph Gales, the Iris by Sheffield’s legendary poet and prolific champion of cause, James Montgomery.

Writing under the close scrutiny of suspicious local authorities both the Register and the Iris presented their most controversial material in a section referred to affectionately by readers as “Poetry Corner.”  This section saw the publication of a different poem each week (either written by a Sheffield resident or aggregated from elsewhere) but usually addressed to one of a series of recurrent themes:  religious integration, racial equality, worker’s rights, universal access to education, and political enfranchisement for all.

An overarching concern was that if the government could not legally be criticized, then there remained no safe-guard against tyranny.  As one reader’s poem warned in April 1793, this seemed to be increasingly the case:

We may speak (it is true) if we mind what we say;

But to speak all we think, will not suit in our day.

These lines proved prophetic, with the Register coming to an abrupt close a few months later.  Charged with “conspiracy against the government,” Gales was forced to abandon the paper to start a new life in America as a fugitive.

The Sheffield: Print, Protest Poetry, 1790-1810 project has been releasing a different poem every week, and online readers have been surprised and excited by how prescient they have proved.  One poem titled “On the Effects of Gold” warned that political reform was never likely whilst politicians were more interested in lining their own pockets.  This poem was made live on the Sheffield: Print, Protest Poetry, 1790-1810 website the day before the Panama Papers story broke.

The first installment of the anthology focuses on poems printed between 1794 and 1796, marking the transition from the Register to the Iris.  This transition was brought about when the editor of the Register was charged with conspiracy against the government and forced to flee to America.  There will also be a printed anthology titled Poetry, Conspiracy, Radical in Sheffield (Spirit Duplicator, 2016), and new recordings of some of these poems have already been released on Soundcloud.  We also have a Podcast, which seeks to situate these poems in broader national contexts.  You can follow Sheffield: Print, Protest and Poetry, 1790-1810 on Facebook and Twitter.

Adam James Smith is an Honorary Research Fellow for the University of Sheffield’s Centre for Archival Practices and a Part-Time Lecturer at York St John University. His work focuses on expressions of partisan identity in the eighteenth-century periodical press and he recently completed a PhD about Joseph Addison’s political writing.