In September 1792, on the day of the autumnal equinox, a Welshman named Iolo Morganwg met friends on Primrose Hill near what is now Regent’s Park in London.  There, they made a circle out of stones.  The largest stone was fashioned into an altar.  On this altar was placed an unsheathed sword.  Standing on these stones and dressed in wildly colored robes, the company recited Welsh history and poetry.

They were pretending to be ancient Welsh bards. 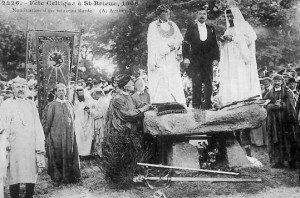 A meeting of bardic performers (called
gorsedd) from Britanny in 1906. This Breton meeting provides a modern example of earlier Welsh models of the festival.

The meeting might sound like a pagan ritual or a group of overzealous Lord of the Rings enthusiasts, but this performance was serious business.  The goal was to revive the customs of an almost forgotten Wales.  Morganwg, the organizer, called these performances gorsedd, which he translated as “voice convention.”  He imagined these meetings as communal poetic voices reasserting a unique Welsh culture, different from that of England or Scotland.  Morganwg kept these performances going for decades, and elements of these early meetings made their way into the Welsh National Eisteddfod, an annual poetry and folk singing festival that still goes on today.

I came across Morganwg and his merry band of guerilla poets while researching Sounding Imperial: Poetic Voice and the Politics of Empire, 1730-1820.  I wanted to offer an unorthodox history of English poetry that looks at the other side of the eighteenth century’s reputation for polite, dainty verse.  Instead, I sought out the century’s wild and bellicose figures, the majority of whom are now forgotten.

Many of them were like Morganwg, who fashioned himself into a national poet.  He wanted to write and perform poetry that was like heroic medieval epics.  This meant recreating ancient ceremonies, such as the one on Primrose Hill, but also composing poems that established intimate connections with readers that many worried had become distant because of mass-market publications.  For him, to be a bard meant to sing “native songs” of “Britons bold and free.”

We haven’t paid much attention to these rowdy vocal experiments because we’ve forgotten what poetry used to be like.  In the twenty-first century, we have two attitudes toward poetry, both of which come to us from the 1800s.  Those who adhere to the first attitude perceive poetry to be moody and introspective, written and read by people in touch with their emotions.  For them, poetry is revelatory; it’s something that changes your life.  Think William Wordsworth and Dead Poets Society.

The second attitude sees poetry as the domain of bad boys and rebel artists who fight against social norms and devote their life to art.  They are a version of Lord Byron, the dashing, drunken nineteenth-century poet who (may have) seduced his half-sister, fled Britain in disgrace, traveled through Europe and the Mediterranean, and was said to be “mad, bad, and dangerous to know.”

But poetry wasn’t always this way.  Sounding Imperial captures what it was like in the decades before these modern attitudes toward poetry took shape.  The 1700s were a time when no one cared about how poets felt.  Poetry was supposed to be about politics, nation, empire, and history, not something as small and mundane as personal feelings.

That’s why my book moves from England to Wales to Scotland and India, seeking out authors who were culture warriors, nationalists, radicals and revolutionaries, and avid colonialists as well.  Their enthusiasm was electric, and their sense of poetry’s possibility was enormous.  For these eighteenth-century artists, composing poems meant communing with the dead, making ancient bards speak again, and preserving cultures that were going extinct.  It required gathering in the early morning light to stand on stones and recite poems in Welsh.  No moody introspection for these performers and no self-serving, brooding rebellion.  Instead, for them, poetry makes the nation sing, fulfilling a mission driven by the grand arc of history.

[This piece was originally published by James Mulholland on the Johns Hopkins University Press Blog:  www.jhupressblog.com] 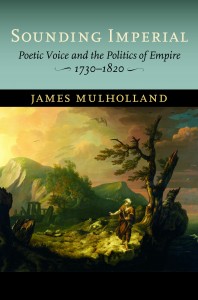 James Mulholland is an assistant professor in the English department at NC State University. His work focuses on the global eighteenth century, primarily on British poetry and Anglo-Indian literature.