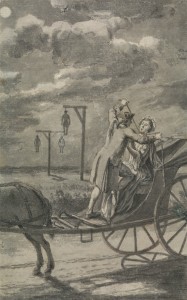 Murder in the Carriage (Probably a Design for The Tyburn Chronicle) by Samuel Wale, 1721-1786, British. Yale Center for British Art, Paul Mellon Collection.

Beccaria thought punishment was effective when it was certain and swift, but not necessarily when it was violent. “If I can demonstrate that it is neither necessary nor useful,” he wrote, “I shall have gained the cause of humanity.” The emotional appeal may be compelling, but it actually hinges on an important argument about rights and power: Beccaria didn’t think the state had the right to punish by death. No individual had the right to take another’s life, and if the state derived its authority from the people, capital punishment amounted to “a war of the whole nation against one citizen.” You can read the whole thing – along with his exception for treason, which provided the loophole in the Maryland constitution – in his Essay on Crimes and Punishments. (It’s interesting to note how his reasoning on the subject of government power also leads him to side with the gun rights lobby.)

Beccaria’s was very much an Enlightenment project – an attempt to remake corrupt institutions by explaining and justifying the limits of their power. It was Beccaria who first explored the concept of “utility,” later codified in Utilitarianism. He was a major influence on English philosopher and liberal Jeremy Bentham, who gave us the Panopticon. If you’re interested in exploring the eighteenth-century justice system first hand, at least in the English context, check out London Lives. It documents the crime and social policy that Beccaria and Bentham were concerned with.