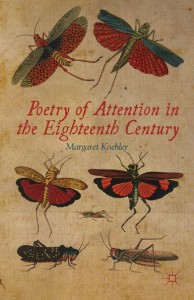 I would like to speak enthusiastically for the affinity of Cognitive Science and Eighteenth-Century Studies, with the stipulation that we acknowledge a reciprocal gain.   The point of a dialogue between these two disciplines is not that contemporary cognitive models can somehow verify what eighteenth-century accounts of cognition primitively conjectured.  The literary and historical texts that serve as “data” for Eighteenth-Century Studies look nothing like a modern laboratory experiment or brain scan.  And yet these earlier accounts of cognition can be just as extensive, precise, and applicable to diverse realms of human experience.  In the case of my own area of interest, attention, historical accounts are especially valuable because contemporary theories often emphasize attention’s involuntary and automatic function and sometimes question whether attention is even a valid concept.

My book, Poetry of Attention in the Eighteenth Century (Palgrave, 2012) , makes a case for the relevance of eighteenth-century models of attention.  Because the discipline of Psychology only turned to attention as an area of research in the late nineteenth century, studies have tended to ignore attention’s earlier conceptual history.  My book attempts to fill one part of this gap by tracing debates about attention during a period of intense interest and significant revision of its meaning.  I then look to poetry for documentation of the workings of attention.  Literary texts are rich but surprisingly unexplored sites for tracing—and, for a reader, reenacting—the precise operations and recurring dilemmas of attention.  To overlook the sheer range of attentive scenarios explored by literary texts and the meticulous evidence they record is to miss a unique set of data. 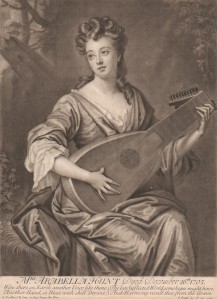 I began this project wanting to understand the frequent references to attention in eighteenth-century poems.  I had been particularly struck by a line from a 1692 ode by William Congreve, “On_Mrs. Arabella_Hunt_Singing.”  In this line a listener wills himself to be fully absorbed in the song:  “Let me be all, but my Attention, dead.”  It seemed to me that this plea embodied a wider aspiration in the poetry of this period to experiment with perception—both to portray a poet’s states of awareness and to elicit a vicarious experience in readers.  Eighteenth-century poems again and again stage scenarios of experimental attention.  In addition to a moment of determined focus like Congreve’s, they explore a range of perceptual puzzles:  How is it different to encounter something novel versus something familiar?   How does perception shift when you are on foot, scanning the landscape while in motion, and then you suddenly zero in on some small detail?  How does darkness enhance the other senses?  How can a poet render the cacophony of a busy London street?

I found myself wondering if the framework of attention might finally name a quality of eighteenth-century poetry that I had noticed but struggled to formulate.  My dissertation had focused on the relationship between literal and figurative tendencies in eighteenth-century poetry, particularly on the way that certain images seemed to “fluctuate” (as I put it) between the two states.  But these terms had come to feel inadequate.  What if I could articulate a related phenomenon more accurately as the poet’s—and the reader’s—shifts of attention?  Part of the reason I had first become a fan of eighteenth-century poetry was because it prompted me to notice and appreciate small details in the natural world.  Right around this same time a student in my eighteenth-century literature had made an offhand comment that seemed to capture the challenges of teaching this material:  “I don’t like reading poems where I have to keep stopping to think about every word.  I like it when poems just flow.”  In other words, he was frustrated by the attentive demands and had expected poetry to offer easier, more passive pleasures.  My teaching and research were dovetailing in a rare and exciting way around questions of attention.

My immediate impulse was to turn to contemporary theories of attention for explanation.  Working through recent studies of attention by psychologists, I found myself at first assuming that eighteenth-century accounts offered embryonic accounts of phenomena that contemporary researchers had gone on to explain more fully and correctly.  Then when I returned to the eighteenth-century texts, I was in some sense looking for the twentieth and twenty-first-century models:  attention as selection versus attention as enhancement, attention as a set of distinct processing resources.  I had for example been fascinated by a 1950s lab experiment in “dichotic listening,” (subjects listened to headphones that fed one sound input on the right and another on the left).  Subjects were told to attend deliberately to one particular side, then later had to report on what they recalled from the “unattended ear” (early versions of the study found that they recalled almost nothing; later versions found more).  This notion of the “unattended ear” felt richly applicable to eighteenth-century poetry, which often challenges readers with competing inputs—high and low, vast and minute—and asks them to reconcile the incongruity.  But rigidly applying the processing model to poetry felt both formulaic and inaccurate.  The more useful insight was that eighteenth-century poetry complicates and mocks the very possibility of allocating attention dichotically.

The most exciting discoveries in this project came when eighteenth-century accounts of attention complicated or expanded contemporary perspectives.  Probably the most salient example was the greater emphasis eighteenth-century accounts placed on voluntary attention.  Here I was inspired by the work of art historian Barbara Stafford , who diagnoses a widespread contemporary fascination with “autopoietic” systems—self-assembling systems that operate spontaneously and automatically.[1]  The current model of the human brain, 90% of which is estimated to function automatically, is one such autopoietic system.  Stafford argues that the current understanding of brain/ mind as a largely automatic system reverses eighteenth-century epistemology, which likened cognition to seeing.  Her critique casts the discrepancy explicitly in terms of attention: “What’s left of selective attention?”[2]  She expresses reservations about the view that attention is mostly unconscious:  “what are the macroconsequences of putting attention almost wholly in the service of microcircuits, cerebral localization, processing-perceptual systems, and other inbuilt constancies?”[3]  Stafford does not refute neuroscience’s claim that the brain operates mostly automatically, but she contends that the imbalance exerts “special pressure on…the remaining empirical 10 percent.”[4]  In her remedy for the autopoietic daze and her formula for maximizing the remaining 10 percent, she extols the dividends of deliberate attention:

Creativity may well lie in escaping, not giving in to, our autopoietic machinery and focusing carefully on the world.  This proactive proposition defies a hyper-Romantic theory of consciousness…that we can never perceive the real world but only our mental representations.[5]

One way to escape a hyper-Romantic theory of consciousness is to look back to earlier models.  I would argue that this call for a new aesthetic commitment to “outward-directed attentiveness” finds a vital precedent in eighteenth-century poems.[6]

Unlike their successors the Romantics, eighteenth-century poets did not view active, detailed attention as hostile to aesthetic experience.  Possibly the plainest articulation of the eighteenth-century model of attention emerges as it is undone by an early Romantic theorist.  Near the end of the century, Archibald Alison argues that focused attention stifles the imagination and that aesthetic  experience requires the surrender of voluntary attention:

When we sit down to appreciate the value of a poem or of a painting, and attend minutely to the language or composition of the one or to the coloring or design of the other, we feel no longer the delight which they at first produce.  Our imagination in this employment is restrained, and instead of yielding to its suggestions, we studiously endeavor to resist them by fixing our attention upon minute and partial circumstances of the composition.[7]

While Alison explicitly opposes attention and imagination, eighteenth-century poetry demands their co-existence.  Attending to details of a scene is part of the imaginative response to it.  This aspiration is one of the reasons why eighteenth-century texts can seem difficult and alien to contemporary readers, who have inherited a Romantic aesthetic.  My book repositions eighteenth-century poems as a collective model for assiduous reading and supple, wide-ranging attention.  It identifies a genuine insight that Eighteenth-Century Studies has to offer about cognition:  that active, deliberate, and demanding attention is a crucial component of imagination.

[2] Barbara Maria Stafford, “Neuroscience and the Future of the Art Museum.”  Talk at the High Museum of Art, Atlanta, GA (March 2007).