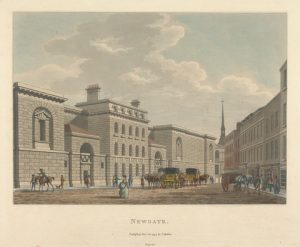 The early eighteenth-century British press was a hotbed for propaganda wars:  in the midst of the Succession Crisis, both Whig and Tory writers in London kept their fingers on the pulse of foreign affairs, war, and national politics.  Renowned writers Joseph Addison and Richard Steele published on local goings-on, religion, and literature in their notably Whig periodicals, The Spectator and The Tatler.  Henry Fielding satirized Jacobites after the Rebellion of 1745 in The Jacobite’s Journal.  Though far less popular, the pro-Tory and pro-Jacobite press was booming, as well.  One pair of British periodicalists that quietly rose to notoriety was duo George Flint and Isaac Dalton, who published a series of treasonous Jacobite journals from 1715 to 1717.  Weekly Remarks and Political Reflections, Upon the Most Material News Foreign and Domestick ran from 1715 to 1716 and landed Flint, its author, in Newgate Prison after he was arrested in July, 1716 for seditious libel.  He continued to write and have his periodicals published, though, and produced Robin’s Last Shift in 1716, which became The Shift Shifted later that year, and Shift’s Last Shift in 1717 as it attempted to outrun further government censorship.  Dalton, his printer, was arrested and imprisoned four separate times for offences to the crown.  Though their individual timelines are fascinating by definition, it is also worth investigating Flint and Dalton’s popularity and skill as periodicalists.  After the first arrests, Flint began to keep a log of their prison experiences, as well as the subsequent involvement and arrests of their family members, which proved quite popular with readers.  Through their persistence and command of pathos, Dalton and Flint’s periodicals provided both strength and exposure to the Jacobite movement in a time of unmatched government suppression.

Flint first published Weekly Remarks on December 3, 1715—just months after the Jacobite rebellion in Scotland and northern England, and only days before the Pretender himself would land on Scottish soil.  For years, tensions had been brewing between the Whigs, who supported the Hanoverian ascendancy to the British throne, and the Jacobites, who supported the Stuart line of succession and were planning to take immediate action.  With James II still in France, the Earl of Mar called a war meeting in Braemar, Scotland, to discuss plans for the rebellion.  In the fall of 1715, the Jacobites failed to capture Edinburgh Castle, but were successful in taking Inverness, Castle Gordon, Dundee, and Perth—“virtually the whole of Scotland” (Sinclair-Stevenson 96).  However, both the Scottish and English Jacobite forces failed to make an impact against the government armies in October when they fell in both the battles of Sheriffmuir and of Preston.  Shortly after, James sailed from France to Scotland; the December 24 edition of Weekly Remarks reports “this Day or Two, That the Pretender is Landed,” and that a number of Londoners were heard singing Jacobite ballads in the streets (Weekly Remarks, 4: 23-24).  Not long after arriving, however, James escaped from Scotland before the government began to severely persecute the Jacobites.

In his introduction to the first installment of Weekly Remarks, Flint claims the publication would be the source of “a pretty clear and impartial Judgement” (Weekly Remarks, 1: 1).  Each Saturday, the journal printed the news of a number of countries (like Spain, Italy, Germany, and Great Britain) and paired entries with a “Remarks” section, in which the author editorialized on that week’s foreign affairs.  For this Flint was arrested and tried in the summer of 1716:  the Old Bailey criminal court record states he “confess’d he was concern’d in writing the said Libel with another Person, which was to be of a different Nature from any yet publish’d:  That the Prisoner was seen to write some Part of the said Paper.  That it came from his own Hands to the Press.  And that he had own’d to my Lord Townshend and others, he wrote it for his Bread” (“Trial of George Flint”).  Though he had been arrested and imprisoned earlier that year for printing Robin’s Last Shift,I Dalton was again indicted and imprisoned alongside Flint; he was found guilty of cursing King George and attempting to pay prison guards to drink to the Pretender’s health.  He was also charged with seditious libel for printing Weekly Remarks, but “the Evidence failing in fixing that particularly, for which he was cried, upon the Prisoner, he was acquitted” (“Trial of Isaac Dalton” July, 1716).

Dalton would be found guilty of two more crimes related to his Jacobitical printing activities:  in November of 1716, he was charged with seditious libel for printing The Shift Shifted.  In May of 1717, he was again found guilty of libel—this time for printing a pamphlet (titled “Advise to the Freeholders of England”) a number of years previous to his work with Flint.II  This resulted in two additional imprisonments to be served following his July sentence of one year at Newgate, as well as fines to be paid and a day spent in the pillory.  In the article “Liberty and Libel:  Government and the Press during the Succession Crisis in Britain, 1712-1716,” P. B. J. Hyland describes this punishment as “a symbol of the ministry’s triumph, and perhaps to avenge its earlier humiliation” (Hyland 881).  But the Weekly Remarks would not be put down so quietly, no matter the efforts the government took to silence Flint and Dalton.  Through their own writing (before that privilege was taken away) and the interference run by family members, they continued to publish their periodicals, condemning the treatment of prisoners at Newgate and the overall actions of the government with a renewed passion.  One excerpt from the August 18, 1716, edition of The Shift Shifted describes Flint’s imprisonment as unthinkable and cruel.  As they starved and endured overly cramped quarters, the inmates were punished for attempting to share their rations with one another.  Flint himself “contracted another cruel Sickness,” and his wife was soon also sent to prison for helping publish The Shift Shifted (The Shift Shifted, 16:94).  The account, a dramatic exercise in pity and shock, reads,

“Yet his Wife for endeavouring to help her Husband, (which most think to be a Wive’s Duty) and in a way which she could not think unlawful, is also close imprison’d, and cannot be let out upon Bail, tho’ the Husband (beside the Bail) offers to take upon himself whatsoever his Wife can be charg’d with.  Now one would think her Crime could be no less than High Treason, and at the same time it is alledged to be no more than Ordering the Carriage of a few News-Papers.”  (The Shift Shifted, 16:94)

Neither man was stranger to this kind of rhetorical appeal.  In remarking on the Battle of Sheriffmuir in the December 3, 1715, edition of Weekly Remarks, Flint describes the horrors seen by the Jacobite soldiers on the battlefield:  they stood “like Motionless Statues, seeing their Friends cut to pieces by one third of their Number” (Weekly Remarks 1:5).  But perhaps the most provocative account Dalton and Flint provide is another entry in the August 18 edition of The Shift Shifted, following Dalton’s July arrest.  In an sensationally dramatized fashion, it details the subsequent arrest of Dalton’s sister, Mary, for continuing to print the treasonous periodicals after Flint and Dalton were arrested:

“To do Good and Suffer Evil, is to act a Royal Part; and therefore I am not a little pleas’d that it is faln to my Share, to undergo so much Evil for endeavouring to do good to my Country … However, to imprison a Man for a Fancy, tho’ he be thereby ruin’d, we wave that as a Trifle, a Nothing to Moloch.  But to take his young Maiden Sister only for happening to receive a little Money for him; for this, I say, to cram her into a Messenger’s, and thence bring her directly to the Bar, all overwhelm’d with Tears and Confusion, without a Moment’s Preparation for her Tryal, and there after a Fine of 30 Marks, appoint the beautiful young modest Maiden to remain confin’d for a Twelvemonth in a loathsome Gaol, conversing with the Strums of Newgate.  Suppose she have innocently assisted her Brother in his Distress, does that (call it a crime) come up to this Punishment?  Was ever such a Virgin ever so unmercifully expos’d for such a Crime.”  (The Shift Shifted, 16:94)

As McDowell asserts in The Women of Grub Street:  Press, Politics, and Gender in the London Literary Marketplace 1678-1730, Dalton was clearly crafting his words in an entirely gendered way to gain sympathy from the public for his and his sister’s situation:  “Isaac Dalton represented [Mary] as a sentimental heroine in the merciless clutches of an oppressive ministry … as a genteel young lady” who ultimately “became a martyr to the government” (McDowell 108-109).  And it worked.  Randall McGowen notes that the pillory “inflicted humiliation and brought notoriety to an offender, at least as much as physical suffering” (McGowen 123).  But the crowd that assembled the day Dalton was pilloried at Newgate did not curse at him or throw rotten tomatoes his way; they cheered him on and collected money for him to pay his fines instead (Hyland 881-882).

Flint and Dalton’s powerful publications accomplished what the English government wanted to avoid at all costs.  As Kathleen Wilson argues in “Inventing Revolution:  1688 and Eighteenth-Century Popular Politics,” they and other Jacobite journalists had become successful critics of Whig ideology, penning vivid editorials on the party’s corruption and abuse of power.  They believed “the government was a trust, based on popular consent, in which people of all ranks had residual rights separate from those of their representatives.  These included the rights to a free press, to lawful assembly, and to canvass public affairs and protest against bad governments and bad laws” (Wilson 372).  When those rights were infringed upon, Flint and Dalton were quick to remark on it in their writing, and their subsequent arrests only bolstered the frenzied reports featured in their periodicals.  They had amassed a following—both among fellow Jacobites, and among the pro-government Whig newspapers that continuously reported on their misdeeds and run-ins with the law.  What started out as an underground effort to undermine the politics of their enemies quickly became an intense and public battle that gave the Jacobite movement new exposure in London.  In using descriptive storytelling, interrogating moral and ethical norms, and appealing to the sympathies of their audience, Flint and Dalton brought the Jacobite movement to the forefront of English politics by changing the government’s own game.

I.  See both the March 17 and 31, 1716 editions of James Read’s The Weekly Journal, Or, British Gazetteer, Being the Freshest Advices Foreign and Domestick for briefs on Dalton’s original arrest.

II.  See both the November, 1716 and May, 1717 trials of Isaac Dalton on the Old Bailey Proceedings Online.

Flint, George.  “Great Britain.”  The Shift Shifted, Or, Weekly Remarks and Political Reflections, Upon the Most Material News Foreign and Domestick.  August 18, 1716.

—.  “Great Britain.”  Weekly Remarks and Political Reflections, Upon the Most Material News Foreign and Domestick.  December 24, 1715.

—.  “Introduction.”  Weekly Remarks and Political Reflections, Upon the Most Material News Foreign and Domestick.  December 3, 1715.

—.  “Great Britain.”  The Weekly Journal, Or, British Gazetteer, Being the Freshest Advices Foreign and Domestick.  March 31, 1716.