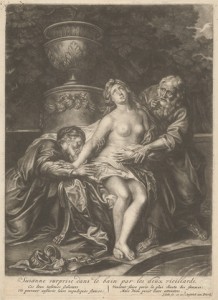 “How could some three-hundred-year-old author interest me?” modern students gasp with dismay.  But the century that coined the term “rape culture” has a lot to learn from eighteenth-century writers like Eliza Haywood because although we might have invented the term, we only inherited the concept.  Haywood would be dismayed to find just how much hasn’t changed in this century of female “equality.”  Consider this 2013 interview with tennis star Serena Williams in the wake of the Steubenville rape trial:  “[Those boys] did something stupid […] but why was she that drunk where she doesn’t remember? […] she shouldn’t have put herself in that position…”

This is rape culture at its finest:  Young victims accused of  “willingly behaving like a drunken whore,” while their rapists have only “[done] something stupid.”  It’s a modern problem, we say, because “back in the day,” men knew how to treat a lady, and ladies knew how to behave.  But Haywood teaches us that rape happens when we train women to value attracting men above independence, and more importantly, when we encourage men to devalue and sexualize women.

In the early-eighteenth century, Haywood quickly became known as the queen of romance, but her work encompassed more than today’s Danielle Steel.  An actress and author, she wrote in every existing genre—all as a single mother of two.  Throughout her work, she stresses the dangers of a society that encourages women to be sexually attractive, yet blames them for attracting sexual assault.  Her characters struggle against the label of ‘whore’ for saying “yes,” but ‘liar’ for saying “no;” they ‘bloom unseen’ at home, but ‘spoil’ themselves by leaving; they live in a world where sleeping can be an invitation for sex.

Fantomina: Or, Love in a Maze (1725) is perhaps Haywood’s most intriguing example of amatory fiction, and it provides a good case study for understanding the similarities between contemporary rape culture and the sexual conventions of the eighteenth century.  The protagonist of Fantomina is not unlike many contemporary victims of rape; she is an attractive young woman who finds herself on the brink of adulthood.  Fantomina is also uneducated in the ways of the world and is naturally vain and curious.  A social butterfly, Fantomina frequents the theatre and there observes prostitutes interacting freely with gentlemen.  Curious, Fantomina visits the theatre the next night dressed as a prostitute in order to try her hand at what she assumes is flirting.  The narrator indicates that Fantomina does not understand the gravity of a young gentlewoman playing at this game, and the night ends with her being solicited by a gentleman by the name of Beauplaisir.

Though a gentleman, it is socially accepted that Beauplaisir might solicit the favors of prostitutes while also courting virginal young women for a potential wife.  This double standard, which mirrors contemporary society’s penchant for shaming sexually active young women, yet sympathizing with young men, situates Fantomina’s role-playing on very risky ground.  Haywood describes Fantomina as sexually excited yet very confused by Beauplaisir’s direct solicitation of her body:  “strange and unaccountable were the whimsies she was possessed of, wild and incoherent her desires, unfixed and determined her resolutions” (Haywood 44).  At this point, the similarities between drunkenness and Fantomina’s state should be very clear:  diction such as “strange,” “unaccountable,” “wild,” and “incoherent” lead the reader to believe that Fantomina is sexually aroused to the point of deep confusion.  Beauplaisir arrives at Fantomina’s lodging, but what ensues is most certainly rape.  The scene is worth repeating here to show the juxtaposition between what Fantomina thinks she wants and what Beauplaisir takes from her:

She had now gone too far to retreat.  He was bold; he was resolute; she, fearful, confused, altogether unprepared to resist in such encounters [because she is a virgin], and rendered more so by the extreme liking she had to him.  Shocked, however, at the apprehension of really losing her honour [her virginity], she struggled all she could.

The syntax in the first sentence parallels Beauplaisir’s forcefulness with Fantomina’s fear.  She does not consent; she is punished for her sexual curiosity.  She is ruined while he is satiated.  Even after Fantomina’s confession that she is really a gentle-born virgin who did not understand the implications of going to the theatre dressed as a prostitute, he continues to take advantage of her by using her as a mistress until sex with her becomes “tasteless” and “insipid” (Haywood 50).  This would seem like Haywood chooses to punish the young Fantomina, but the story does not end there.  Fantomina reinvents herself three more times in order to attract Beauplaisir, and he takes advantage of each “new” woman every time.  Creating her own sexual agency, Fantomina’s plot is foiled only by pregnancy and Beauplaisir’s refusal to ask for her hand in marriage—a sharp reminder from Haywood that female sexual agency is short-lived in a world where women are punished for both desire and innocence.

In another novel from Haywood’s amatory repertoire, Love in Excess; or The Fatal Inquiry (1719-1720), Haywood readers learn that seduction/rape is not the woman’s fault; it springs from false male perceptions of women (rape culture).  Like Fantomina, the novel shows one man, Delmont, taking repeated advantage of women’s love, confusion, and fear of reprisal to press them for sex.  In one such encounter, the woman is labeled a whore and sent to a convent for sneaking out to meet him; he escapes without blame.  But, Haywood doesn’t believe women can prevent rape by staying home.  Delmont’s next amour is a young woman living in his home as his ward.  Though she’s fallen for him, he is married, so she strives to avoid him.  Relentless, Delmont breaks into Melliora’s room while she sleeps.  In his mind, her feelings for him mean “yes,” and in his home, she is fair game.  Melliora is in a ‘drunken’ dream state and unknowingly responds to his advances.  Reading her unconscious failure to fight him as consent, he “[seizes] her;” she awakens in protest (“What is this?” “leave me”), but he claims he would be less of a man if he stopped now (Haywood 117).

This is important.  Haywood shows that men can control their sexual urges, but male culture teaches them otherwise.  Like Beauplaisir, Delmont has learned to take advantage of women whenever he can.  His friend Despernay calls him a fool for not molesting Melliora:  How could “‘a man of wit […] let slip so favourable an opportunity.’”  Despernay insists that ‘no’ means ‘yes’:  “Women are taught by custom,” he explains, “to deny what most they covet, and to seem angry when they are best pleased.”  When Delmont balks at “ruin[ing] such sweetness,” his friend sneers that not pressing for sex would be an insult to his–and every man’s–masculinity (Haywood 113).

What Melliora and Fantomina show us is that for eighteenth-century women, the body is not one’s own.  In states of psychic shutdown, Melloira and Fantomina appear drunk and disordered and are therefore fair game.  Governed by the laws of strict social code, women’s bodies are available to men (who are taught to take advantage wherever possible).  Sound familiar?  Beauplaisir’s and Delmont’s names could easily be changed to those of the Steubenville rapists, and Fantomina and Melloira could be the Jane Doe of the Stuebenville case or any of the nameless women who never report rape because they assume they won’t be taken seriously.  Ultimately, what we see here are the ruinous effects of misunderstandings about women’s bodies and who controls them, and Eliza Haywood has much to offer today’s students regarding the history of such control and its brutal effects on women.