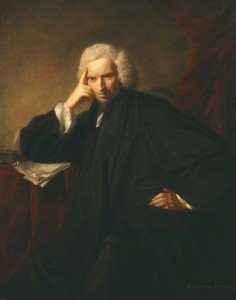 From July 8th to 11th the tercentenary conference celebrating the birth of Laurence Sterne was held at the Royal Holloway University, attended by 68 delegates, mostly professors from universities around the globe. Over 60 papers were presented about Sterne and his works over four days, revealing not only his genius but also his appeal, providing adequate interpretation is given. Yet Sterne is little known outside of academia, and from my reading of him and my understanding of today’s world, there are, I believe, distinctive connections which make him a man for our times regarding religion, personal identity and human rights.

First: religion. Sterne’s time was one of spiritual unrest following the civil war of the previous century and there was a charismatic phenomenon taking place in the Methodist movement sweeping the country. Today, religious unrest has led to the expression of religious observance in many new forms, while fundamentalism in all its forms, suffused with charisma, is flourishing. Sacred texts provide the backbone for most religions and it is here that we find Sterne’s focus most relevant. Sterne’s sermons have a unique, free flowing style; in one instance he inserts, into a short passage of twenty lines, the paraphrases of seven Biblical texts, Mtt. 5.44 and 6. 14-15, I Pet. 2.11, Cols. 3.2, Hebs. 11.10 and 13.14, and Ps. 50.9, and no other preacher would have turned one of the most lurid and gory of Old Testament stories, “The Levite and his Concubine” into an example of the beauties of companionable friendship between the sexes. To treat scripture like this was a daring and audacious thing to do and singles him out as representing an approach diametrically opposed to the literalist and dogmatic.

Second: personal identity, a peculiarly modern concern. Fifty years ago, Helen Moglen in her essay for the bicentenary conference writes: “Tristram seeks with the anti-hero of the contemporary world an answer to the unanswerable question, ‘Who am I?’”[1] Sterne lived at a time of emerging scientific discovery; he refers to that “great harvest of … learning…now ripening,” and “icals” were appearing as distinctions were recognized. Among these “icals” he refers to the “physical,” “physiological,” and the “chemical” (Tristram Shandy 1.21.57). Neuro-science today is making new discoveries at a brisk rate and at the same time they are discovering their ignorance about it. When we think of the brain and the workings of the mind, we can only say with Tristram: “———Endless is the search of truth” (TS. II.3.80). Such humility is needed today as we learn that every scientific discovery opens a door onto yet another mystery, the biggest being that of our own minds.

Personal identity is inextricably bound up with sexuality, and Sterne speaks to us with particular relevance about this most basic of subjects.[2] Today its nature is being re-evaluated, with the undermining of taboos and inhibitions and the recognition that it is much more complex, with the masculine and feminine capable of interchange and multiple categories of sexuality emerging. Jesse Molesworth refers to Sterne’s “feminized men of feeling in Toby and Yorick and his masculinized women like the Widow Wadman.”[3]

Lastly, for me Sterne connects with our times in his espousal of human rights. Today religion is involved, often in a negative way, with human rights, and in society at large discrimination, injustice and cruelty are only too painfully alive and kicking. How does Sterne relate to this? Sterne favored abolition; Donald Wehrs and Molesworth find material in support of it in the Sermons, Tristram Shandy, The Letters and A Sentimental Journey, anticipating abolitionist thought.[4] He is against the excessive floggings that were administered in the army, sometimes on trumped up charges as noted in the case of “the poor grenadier … so unmercifully whipped … about the ducats” (TS. IV.4.247). Sterne was no religious controversialist: his criticism of the Catholics is for their cruelty in the inquisition, namely their violation of human rights, and his comments about the “enthusiasm” of the Methodists is in line with his cautionary word about those “who govern this mighty world and its mighty concerns with the engines of eloquence, — who heat …cool …melt and mollify, —- and then harden it again to your purpose —- .” With regard to women’s rights, Sterne has been read as a misogynist author, marginalizing them and reflecting the view of the division of the sexes in his day, but Tristram’s excruciating account of his birth and the way in which his mother was treated by her husband and Dr Slop, with her narrow escape from the lethal caesarean knife, reveals an acute awareness and concern for women’s lot in the 18th century.

In the penultimate chapter of the last volume of Tristram Shandy, we find:

The word humanity screams at us from the page and sums up his unique contribution.

[4] Donald R. Wehrs, “Postcolonial Sterne,”in The Cambridge Companion to Laurence Sterne, and W. B. Gerard, “Laurence Sterne, The Apostrophe, and American Abolitionism, 1788 -1831,” Swiftly Sterneward: Essays on Laurence Sterne and His Times in Honor of Melvyn New.

3 thoughts on “The Tercentenary of the Birth of Laurence Sterne: a Man for Our Times”