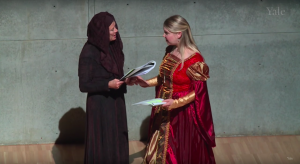 Chelsea Phillips playing Adeliza and Georgina Lock playing the Countess of Narbonne in Walpole’s play The Mysterious Mother. May 2, 2018.

Being involved in a workshop staging of Walpole’s The Mysterious Mother was both a joy and a wonderful provocation to think deeply about eighteenth-century theatrical texts and their creative and pedagogical potential today. One great strength of the project was the open collaboration between the Lewis Walpole Library and scholars, theatre professionals, students, and educators from two continents. This rich population entered fully into the rigor and fun of the project as we discovered and worked to clarify the story (using David Worrall’s wonderful edited version) in a very short amount of time–a restriction that pushed us to work with the text’s style rather than to question it, circumventing a challenge I think many would anticipate with such a project. We were rewarded with an audience that enthusiastically and wholeheartedly entered into the performance (helped in large measure by the phenomenally atmospheric projections and soundscapes) in ways that both validated our own sense of the story and surprised in their ability to transition swiftly between laughter and gravity. In short, the experience of staging the play enabled us to ask better questions of Walpole’s text and eighteenth-century performance, and to appreciate the capacity of audiences today to revel in both; I hope it is only the beginning.