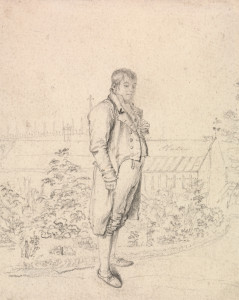 Before the referendum on Scottish independence this past September, commentators pointed out that the historic vote was taking place during the septcentennial of the Battle of Bannockburn, in which Robert the Bruce led an outnumbered Scottish army to victory over English forces.  They speculated this timing would inspire Scots to fight for their freedom from English influence once again.  (Commentators did not point out that election day itself fell on the birthday of Samuel Johnson, who contributed more than his fair share of anti-Scottish jibes.)

Now that Scots have voted to remain with the United Kingdom, perhaps it is more appropriate to recognize that the vote was also held during the bicentennial of Walter Scott’s Waverley—a novel that at once celebrates a distinctively Scottish identity and defends the established Union as a valuable political arrangement.  This complex statement of Scotland’s union with England has echoes in the referendum itself.

Scott’s first novel concerns Edward Waverley, an aimless young officer in the British army who becomes immersed in Highland culture and political intrigue in the weeks leading up to the Jacobite Rising of 1745.  A number of factors inspire Edward to eventually join the Jacobite cause; perhaps the most important is that the romantic atmosphere and culture of the Highlands excite his vivid—but undisciplined—fancy.  A “creature rather of imagination than reason,” Edward is captivated by the region’s natural beauty, the power of its poetry and music, as well as the hospitality, civility, and strength of its people [1].  Even Bonnie Prince Charlie himself is “generous . . . courteous . . . [and] noble-minded” (312).  Edward is not wrong to recognize the value of these traits; his mistake is letting them overcome his reason and seduce him to Jacobitism.  (When describing Robert Burns’s political sympathies, Scott used language very much like what he used to describe Edward’s flirtation with treason:  “I imagine his Jacobitism, like my own, belonged to the fancy rather than the reason” [2].)

In addition to depicting the romance of the Highlands, Scott elevates elements of Scottish law.  When Edward’s friend Fergus Mac-Ivor, a Highland chief complicit in the Jacobite Rising, is condemned to death, he scoffs at the notion that the English were more civilized and enlightened than Highlanders.  He describes the brutal punishment awaiting him—he would be hung (though not to the point of death), disemboweled, decapitated, and then publicly displayed.  Fergus remarks:

This same law of high treason . . . is one of the blessings, Edward, with which your free country has accommodated poor old Scotland—her own jurisprudence, as I have heard, was much milder.  But I suppose one day or other—when there are no longer any wild Highlanders to benefit by its tender mercies—they will blot it from their records, as levelling them with a nation of cannibals.  The mummery, too, of exposing the senseless head—they have not the wit to grace mine with a paper coronet; there would be some satire in that, Edward.  (348)

Contrary to conventional wisdom, and in a remarkably bitter tone, Fergus contends that Scottish law was more humane and civilized before reform imported the “tender mercies” of the English.  The English have barbarized the Scots, not civilized them.

Scott ends the novel by emphasizing the positive elements of Highland culture, mourning that it “has now almost entirely vanished from the land, and with it, doubtless, much absurd political prejudice; but, also, many living examples of singular and disinterested attachment to the principles of loyalty which they received from their fathers, and of old Scottish faith, hospitality, worth, and honour” (363).  The single negative trait he identifies in this passage—“political prejudice”—refers to Jacobitism, but some English characters harbor misguided anti-Scottish political prejudices, so there can be no sense that such bigotry is a purely Scottish shortcoming.  Scott explains that the novel was an attempt to ensure that Highland virtues were not completely lost, to “preserv[e] some idea of the ancient manners of which I have witnessed almost the total extinction” (363).  Saree Makdisi has described such passages as “claims to a sentimental Jacobitism, to the trappings and rituals of a mythic Highland past” by which Scott tries to preserve the “anti-modern otherness” of the Highlands [3].

Yet the novel is certainly not an unalloyed celebration of all things Highland, nor a dive into history’s dumpster to retrieve Jacobite ideals.  Scott challenges the premise of the ’45 when Edward, before he joins the cause, contemplates:  “Since [James II’s abdication in 1688] four monarchs had reigned in peace and glory over Britain, sustaining and exalting the character of the nation abroad and its liberties at home.  Reason asked, was it worth while to disturb a government so long and established, and to plunge a kingdom into all the miseries of civil war, for the purpose of replacing upon the throne the descendants of a monarch by whom it had been wilfully forfeited?” (149).  And because Edward’s eventual allegiance to the Jacobite cause is grounded in Quixotic folly, it does not withstand its early encounters with the enemy.  Just before his first battle against the British forces he abandoned, Edward recognizes the foreignness of his new army:  “he saw the wild dress and appearance of his Highland associates, heard their whispers in an uncouth and unknown language, looked upon his own dress, so unlike that which he had worn from his infancy, and wished to awake from what seemed at the moment a dream, strange, horrible, and unnatural” (236).  The Highlanders are too foreign, too distinct from Edward’s experience of Britain, for him to feel that he belonged in their army.  The “anti-modern otherness” of the Highlands is too much for Edward.

Jacobite foreignness is an important part of the pro-Hanoverian thread in Waverley.  Because they fought to re-establish the Stuarts as the monarchs of the United Kingdom (and not to separate Scotland from that kingdom), Jacobites can be considered Scottish nationalists insofar as the Stuarts themselves were Scottish, and therefore more British than the German Georges.  Yet Scott challenges even the superior British-ness of the Stuarts, frequently reminding readers that Prince Charles and his allies were as continental as they were Scottish.  Kenneth McNeil argues that Fergus in particular “embod[ies] a particular mode of French masculinity that Scott elsewhere associates with the failings of French culture” [4].  This guilt by association with the French would have been especially damning when the novel was published, just at the end of the Napoleonic Wars.

The blend of Hanoverian unionism and Scottish nationalism apparent in Waverley is also manifest in Scott’s own life.  He helped organize King George IV’s visit to Edinburgh in 1822, staging elaborate ceremonies to commemorate the first visit of a British monarch to the Scottish capital in nearly two hundred years.  But he also fought parliamentary efforts to reform the Scottish jury system to more closely resemble England’s, and others to prohibit Scottish private banks from issuing notes of currency under five pounds.  Scott’s protests against the former ultimately failed; he was successful in the latter, which is why his portrait still graces all notes minted by the Bank of Scotland.

Which brings us back to the recent referendum.  In its editorial endorsing a vote against independence, the Edinburgh newspaper The Scotsman, asked: “Does the Union cast a dark shadow over us?  It does not seem that way, Scotland is a prosperous, peaceful, successful country.  We are confident in our national identity with our own distinctive society.  We have our history and our heritage.”  This expresses simultaneous, not divided, loyalty to the United Kingdom and Scotland.  Based on such sentiments, one may infer that the 27% of Scots who voted “no” out of “a strong attachment to the UK and its shared history, culture, and tradition” also felt a strong attachment to Scotland and its own distinctive history, culture, and tradition.  It is a fresh version of the complicated patriotism that Scott depicted vividly in Waverley and elsewhere.

I doubt that many Scots were asking themselves, HWSV?—How Would Scott Vote?  But Scott’s simultaneous embrace of Hanoverian rule and celebration of Scottish identity help clarify some of the impulses behind the results of the referendum [5].

[1] Walter Scott, Waverley, 138.  Subsequent citations will be provided in the main text.

[3] Romantic Imperialism: Universal Empire and the Culture of Modernity, 97.

[5] For a broader consideration of Scottish literature’s relevance to the referendum, see Evan Gottlieb’s recent piece in the The Huffington Post.

Christopher Scalia is an Associate Professor of English at the University of Virginia's College at Wise. He teaches courses in eighteenth-century literature, Romantic poetry, Scottish literature, and creative writing.