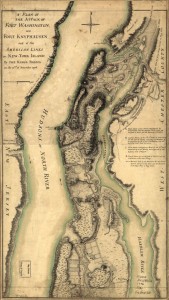 Claude Joseph Sauthier, “A plan of the attack of Fort Washington, now Fort Knyphausen, and of the American lines on New-York Island by the King’s troops, on the 16th of November 1776.” col. map, 48 x 27 cm. Library of Congress Geography and Map Division Washington, D.C.

Within the records of the early United States War Department, amidst the pay receipts and accounts of treaty negotiations with Native American tribes, there are glimpses into the life of relatively ordinary Americans, many illiterate, who served their country during the war for Independence.  Although the official copies of these records were destroyed in a fire in November, 1800, a project to approximate the papers of the early War Department in digital form reconstructs that resource by bringing together digital copies of letter books, sender and receiver copies from archives in the United States, France, and Great Britain.

Included in the papers of the War Department is a letter book kept by William Price, Commissary of Military Stores at West Point from 1784 to 1787.  In the early years of the 1780s, West Point was home to the Corps of Invalids, a regiment of permanently disabled Revolutionary War veterans that had been established in 1777.  Although the Corps was disbanded in 1783, at least one of its members remained in the Hudson Valley and appears in Price’s letter books:  Margaret Cochrane Corbin, also known as “Captain Molly.”

Corbin was born in south-central Pennsylvania in 1751, and she was raised by relatives after her parents were killed in a conflict with local Native Americans when she was only five years old.  She married John Corbin around 1771.  When John enlisted in the army during the American Revolution, Margaret accompanied him, joining the many women who provided necessary support services for the American army.  When John, an artilleryman, was killed during the British attack on Fort Washington in November 1776, Margaret took his place at the cannon for the remainder of the battle.  She received permanent wounds to her left arm and the left side of her chest and face.

In 1779, Congress awarded Margaret a monthly pension equal to half of a soldier’s pay to last “during her natural life, or the continuance of the said disability” (Journals of the Continental Congress, Tuesday, July 6, 1779), and she was the first woman to be awarded a military pension by Congress.  Margaret was also enrolled in the Corps of Invalids that same year, during which time the Corps was stationed in Pennsylvania.  She traveled with her regiment to West Point in 1781 but remained in the Hudson Valley after the unit was disbanded–likely lacking anywhere to go or at least sufficient means to travel, especially given her continued disability.  Because Congress guaranteed Corbin a lifelong pension, her welfare became the responsibility of Price, West Point’s Commissary.

According to Price, “Captain Molly” was “such an offensive Person that People are unwilling to take her in Charge” (William Price to Henry Knox, Jan 31, 1786).  She cursed, was rude, and was a generally unpleasant person with whom to live.  Nonetheless, Price took his responsibility to Captain Molly seriously.  His reports to the War Department describe the difficulty of finding someone willing to provide Corbin with room and board, but he was willing to remove her from a situation where she was “not so well treated as she ought to be” (William Price to Henry Knox, October 7, 1786).  It is unclear whether it was Corbin’s identity as a veteran or as a woman, or the combination, which guided Price’s sense of how she ought to have been treated.  He may have been simply trying to ensure that her treatment was equal to what she had received before the Corps of Invalids was disbanded.

Corbin was a woman from a farming family whose presence in the archives rests upon one extraordinary action.  While the Papers of the War Department collection contains many famous names—Judith Sargent Murray, Henry Knox, James McHenry—it also holds the stories of many ordinary people who otherwise left little or no documentary records.  Although we do not have Corbin’s own hand to tell her story, Price’s letters and reports allow us to discover something of her life after the revolution, a period often overlooked by those recounting her history.  The Papers of the War Department digital collection allows anyone with an internet connection to access and explore the stories of Corbin, her fellow veterans, and others whose experiences were long presumed lost.

Megan R. Brett is a Digital History Associate at the Roy Rosenzweig Center for History and New Media in the Public Projects Division, where she has worked on projects such as the Papers of the War Department, Histories of the National Mall, and Omeka software. She is a doctoral student in the Department of History and Art History at George Mason University. Her dissertation will consider the strategies used by early American diplomatic families abroad to sustain ties to their extended families and home nation.