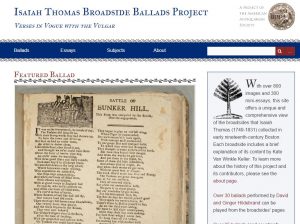 What do Red Jacket, Pompey Fleet, James Macpherson, Mary Washington, and Geoffrey Chaucer have in common? They all are depicted in, influences for, or creators of the 300 broadside ballads Isaiah Thomas (1749-1831) collected from Boston printer Nathaniel Coverly in 1814.  Mostly printed in Coverly’s shop between 1812 and 1814, these ballads offer a window into street life in the early United States, with an eye toward the future but with a preoccupation with the past.  Thomas coined the phrase “verses in vogue with the vulgar” to describe this collection that he had bound in three volumes and that are some of the American Antiquarian Society’s earliest holdings.

With over 800 images and 300 mini-essays, Isaiah Thomas Broadside Ballads Project: Verses in Vogue with the Vulgar offers a unique and comprehensive view of the broadsides that Isaiah Thomas collected.  Each broadside includes a brief explanation of its content by Kate Van Winkle Keller.  The Isaiah Thomas Broadside Ballads Project includes over 30 ballads performed by David and Ginger Hildebrand as mp3s on the site.  And 25 broadsides (and counting!) have been transcribed with TEI-encoded XML available for download.  In addition to the short essays that accompany each broadside, longer essays by Keller, Dianne Dugaw, and Marcus McCorison give an overview of the content, detailing the Coverly printing network, the type and paper used to print the broadsides, and the culture of song in early America.  All of the sources cited in these essays and in the individual broadside essays are in the Works Cited, which includes over 1,200 sources.  Please join our Zotero group, which is open to the public and will allow a user to export these citations as needed.

In the spirit of AAS’s rich tradition of deep cataloging, extensive subject headings are provided for each broadside, and these subject headings can all be searched.  This index of topics covered in the ballads allows a user to group the ballads thematically in a way analogous to chapters in a book.  For example, by clicking on “Adultery” one can see that two broadsides include ballads on this subject:  “Penny-Worth of Wit” and “The Country ’Squire.” Note too that the subject headings appear at the bottom of the page.  By clicking on “children,” one can see the 10 total items that include this subject heading as well.  Any combination of search results can be exported by the user in a number of machine-readable formats.  Additional mechanisms are also in place to illuminate the relationality of the broadsides.  For example, most individual essays make reference to other ballads that share a tune or perhaps a thematic link.  In addition, the woodcuts that appear on multiple broadsides can be traced.

Molly O’Hagan Hardy is the Digital Humanities Curator at the American Antiquarian Society where she manages a number of projects including the Isaiah Thomas Broadside Ballads: Verses in Vogue with the Vulgar and the transformation of the Printers’ File into linked open data. Her research interests include the history of copyright and of bibliography, and she works to make the historical record survive and thrive in digital environments.