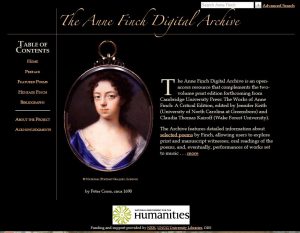 Readers of early British poetry and early women writers will soon be able to discover all of Anne Finch’s poems and plays in the first scholarly edition of her work:  The Cambridge Edition of the Works of Anne Finch, Countess of Winchilsea, general editor, Jennifer Keith:  Volume 1:  Early Manuscript Books, edited by Jennifer Keith and Claudia Thomas Kairoff, associate editor Jean I. Marsden; and Volume 2:  Later Collections, Print and Manuscript, edited by Jennifer Keith and Claudia Thomas Kairoff. The print edition establishes for the first time an accurate record of all known work by Finch that has survived:  more than 230 poems (the number varies depending on how one enumerates different versions of some poems), two plays, and letters.

Already available is the open-access Anne Finch Digital Archive, which complements the print edition.  Materials on the open-access Anne Finch Digital Archive enable users to explore the archival elements of Finch’s texts.  The featured poems on this site have been selected from a great number in Finch’s œuvre to illustrate her work in different poetic kinds, including song, fable, biblical paraphrase, translation, verse epistle, and devotional poetry.  For every featured poem, the site includes commentary with embedded links to illustrations, information about composition and printing dates and sources, audio files of the poem read aloud, and source copies showing authorized manuscript and print texts with transcriptions.  We will continue to add resources to the site, including recordings of musical performances of the songs featured.  The multimedia elements of this site reflect the various ways that Finch’s work engaged her contemporary readers and listeners, who knew her work in manuscript, print, or performance, or in all of these forms.

Writing in an era known for the overtly public and political poetry of John Dryden, Jonathan Swift, and Alexander Pope, Anne Finch, Countess of Winchilsea (1661-1720), articulated a different literary and political authority.  From her position as a female aristocrat, once at the center of the court and then for many years a political internal exile, Finch explored the individual’s spiritual condition as inextricable from social and political phenomena.  Her interest in affairs of state frequently informed her exposure of patriarchy’s constraints on women and men.  Finch’s work participates in the strategies of her contemporaries such as Dryden and Pope—the public speaker who sought to influence state politics, the renovator of classical mythology and pastoral who exposed contemporary mores, the fabulist who satirized state and society, the friend who used the couplet for conversation and exchange, and the wit who made discernment a moral good.  But Finch both furthers and deviates from these practices.  Readers will discover her innovative use of form and genre to explore a wide range of themes and her complex use of tone to enlist the reader’s discernment and develop a poetics of intimacy.

The edition has received generous support from the National Endowment for the Humanities, the Folger Shakespeare Library, the Women’s Caucus of the American Society for Eighteenth-Century Studies, the William Andrews Clark Memorial Library, the University of North Carolina at Greensboro, and Wake Forest University.

Jennifer Keith is Professor of English at the University of North Carolina Greensboro where she specializes in Restoration and eighteenth-century literature, with particular concentrations in poetry, women’s writing, textual editing, manuscript studies, and digital humanities. She is the General Editor of The Cambridge Edition of the Works of Anne Finch, Countess of Winchilsea.