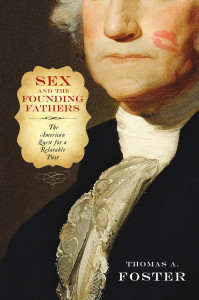 Sex and the Founding Fathers by Thomas A. Foster

Living as we do in an era in which public figures are subjected to extreme scrutiny in the form of media intrusions, we tend to think of our interest in reconciling public images with private sexual conduct as uniquely postmodern. In fact, Americans have long invested national heroes with superior moral status and at the same time probed into their private lives. If the Founding Fathers seem remote to us now, that distance persists despite the efforts of generations of biographers who attempt to take their measure as leaders and tell us what they were really like in their most intimate relationships. From the early years of the Republic till now, biographers have attempted to burnish the Founders’ images and satisfy public curiosity about their lives beyond public view. At the same time, gossips and politically motivated detractors, claiming to have the inside track on new information, have circulated scandalous or unpleasant stories to knock these exalted men off their pedestals. Looking back at the stories and assessments that have proliferated in the two and a half centuries since the Founders’ generation, we see the dual nature of these accounts and how they oscillate between the public and the private, between the idealized image and actions in the intimate realm. We see how each generation reshapes images of the Founders to fit that storyteller’s era.

On the one hand, the Founders appear desexualized. The images of the Founding Fathers that we regularly encounter—as heads on money, as reference points in discussions about political ideology, and as monuments at tourist sites—assert their status as virtuous American men. They typically appear either disembodied—as heads or busts—or in clothing that reminds us of their political or military position. Their flesh is covered from neck to wrists, with only hands and face exposed. Typically, the men are frozen in advanced age—generally gray-haired, if not topped off with wigs—further confirming their identities as desexualized elder statesman for generations of Americans who associate sexual activity with youth (1).

On the other side of the coin, curiosity about their “real” lives has continued seemingly unabated into our own time. In 1810, Mason Weems, originator of the cherry-tree myth, emphasized the importance of discussing George Washington’s personal life. Weems argues that “public character” is no “evidence of true greatness” and calls for a spotlight to be shined on his “private life.” Weems gives the compelling example of Benedict Arnold, who could “play you the great man” “yet in the private walks of life” reveal himself to be a “swindler”—including not only his political deception but his use of the “aid of loose women.” For Weems, the Founders’ intimate relationships should not be off limits for Americans: “It is not, then, in the glare of public, but in the shade of private life, that we are to look for the man. Private life is always real life.” To truly know them, their conduct in that realm is an important piece of the puzzle (2).

By tracing how intimacy has figured in popular memory of the Founders from their own lifetimes to the recent past, Sex and the Founding Fathers shows that sex has long been used to define their masculine character and political authority and has always figured in civic and national identity (3).  Each generation has asked different questions about the Founders and their private lives, but Americans have consistently imagined and reimagined the private lives of the Founders through the lens of contemporary society. As Michael Kammen and others have argued, countries “reconstruct their pasts rather than faithfully record them” and “do so with the needs of contemporary culture clearly in mind” (4).  Gore Vidal has referred to our selective national memory as “The United States of Amnesia” (5).  It is true that we tend to embrace the the national narratives that we desire and “forget” those that we prefer to hide away. Stories about the Founders’ lives have always been told in ways that make use of the norms and ideals of the time period.  Founders can never be embraced in their late-eighteenth-century context, for, as the saying goes, the past is a foreign country—and the Founders lose their cultural utility when viewed as foreigners. Americans want to see themselves in their images, because these men, the men who created America, are by their actions the embodiment of the nation and of our national identity.

The Founders lived in a world that fit neither the stereotyped image of a Puritanical past nor a more modern sexual culture that makes them “just like us.” The problem with using sex to make the Founders relatable is that sex is not transhistorical: It can’t be used in this manner any more than medical or racial understandings of the day can be used to connect readers from early America to today.  Remembering the intimate lives of the Founding Fathers with simple tropes, hyperbolic superficialities, and meaningless romanticized generalizations prevents us from meaningfully engaging with eighteenth-century sexual variance. Doing so also trivializes sex, perpetuating our own discomfort with the topic, a discomfort with a long history. Superficial glosses relegate the subject of sex to the status it held in previous generations—one of titillation, shame, and humor—all of which rely on a certain assertion of the transhistorical or human understanding of sexuality. But the ways in which Americans have ordered their sexual lives and their sexual identities have changed greatly over the centuries.  Viewing the Founders’ intimate lives and identities as somehow accessible to us through surface descriptions, such as “love at first sight” or “healthy sexual appetites,” prevents us from taking historical sexual identities and sexual expressiveness seriously. By focusing in a sustained way on the manner in which Americans have asked and answered their own questions about sexual intimacy and the Founders of the nation, we can examine how Americans have both broached and obscured sexual realities and the cultural connections between sex and nationalized masculinity in the public memory of these men.

Collectively, these stories show how gendered sexuality has long figured in our national identity via the public memory of the political leaders of the American Revolution. By tracing these histories of public memory, we are confronted with how blurred the line has long been between sex and politics in memories of the Founders and how sex has helped tie an ever-diversifying American public to a handful of staid, lite, white, eighteenth-century men.

1.  Indeed, in recognition of this issue, several museums of Founding Fathers’ homes have launched efforts to circulate more youthful, vital images in an effort to connect to modern audiences. And recent biographies that strive to make the Founders more appealing (dubbed “Founders chic” by friend and foe alike) likewise frequently highlight the heights and musculature of the men in their youth in efforts to dispel the dusty old images held in most American’s minds. The term “Founders chic” comes from Evan Thomas (“Founders Chic: Live from Philadelphia,” Newsweek, July 9, 2001). But “Founders chic” “is really “‘Federalist chic,’” according to Jeffrey L. Pasley, who observes that the increased interest in Founders often focuses on conservatives who did not embrace democracy or the “expansion of individual rights,” such as Washington, Adams, and Hamilton. Pasley, “Federalist Chic,” Common-place.org, February 2002, http://www.common-place.org/publick/200202.shtml.

2.  Mason Weems, A History of the Life and Death, Virtues and Exploits of General George Washington (New York: Grosset and Dunlap, 1927), 8.

Read more about Thomas A. Foster’s work on sex and the Founding Fathers: