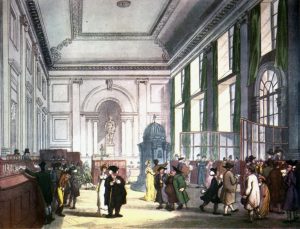 With the exception of Donald Trump and a few others, most of us agree that human use of the earth’s natural resources has caused environmental effects extreme enough to require their own era.  But what to call it?  The term “Anthropocene” has been used by environmental scientists and scholars to designate a new epoch, but does the term have the force to name the political critique of climate change that such a moment demands?  Jason W. Moore introduced the term “Capitalocene” to provide more analytical focus, arguing that “Anthropocene” does not name the system that produces modern environmental catastrophes:  capitalism [1].  By focusing on the “anthro,” we maintain the delusion that all humans are equal participants in this global change, ignoring the way that human-caused climate change is largely driven by the consumption of resources within developed nations, fed by an economic system structured around compounding economic growth.  Thinking about eighteenth-century British culture helps to frame why “Capitalocene” may be the better term and why the story we tell about our environmental crisis matters. 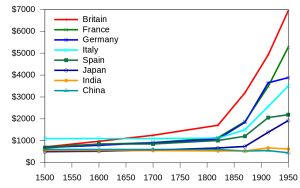 Our culture’s addiction to ostensibly infinite economic growth, with its optimistic fantasy of universal upward mobility, is what needs to change, and naming our era the “Capitalocene” helps do that [3].  Many scholars trace the beginnings of human-caused climate change to industrialization, with some, like Andreas Malm pointing the finger at James Watt’s pivotal 1775 iteration on the steam engine [4].  The engine behind the engine is the circulation of capital, in particular, capital’s reliance on the production of surplus value to feed its monstrous appetite for economic growth.  The economic form that is specific to capital is precisely its turning money into more money through its circulations of financial and commodity exchange.  Without money breeding money, without the 4 or 5% return on investments, those of us lucky enough to have pensions, won’t be able to retire.  I am vehemently opposed to building the Trans Mountain pipeline that will bring more of Alberta tarsands bitumen to market; yet, teaching at a public university in Alberta, I know that we will only hire more Humanities faculty if that oil gets to market and thus, I sometimes feel a dirty secret of relief when pipelines are built and Alberta’s wealth grows.  We are all embedded in compounding growth.  But maybe we need to break the addiction and embrace downward mobility to shape a different relation to our world.  Here, the eighteenth-century novel rather than political theory or economic history can help us think it through.

Adam Smith’s Wealth of Nations (1776) best captures the eighteenth-century’s reimagining of the world as having the capacity for infinite economic growth.  For Smith, the expansion of wealth existed in global commerce which led him famously to claim that “[t]he discovery of America, and that of a passage to the East Indies by the Cape of Good Hope are the two greatest and most important events recorded in the history of mankind” [5].  Economic historians have the evidence to suggest Smith was right; foreign trade did increase wealth in the late-eighteenth century.  This period sees the momentous shift to a constant growth economy as Britain’s Gross Domestic Product (GDP) began its annual increase around 1760 and, with the exception of the World Wars, has largely not stopped since [6].  Where does the “more,” the surplus value, come from?  Marx tells us that there are three areas that such growth can emerge from commodity production:  cheaper labor; access to new natural resources; and technological efficiencies.  From African slave labor in the eighteenth century to Bangladesh sweatshops today, from stealing Indigenous North American lands to the Alberta tarsands in my backyard, from Watt’s steam engines to today’s automated factories, history shows us the myriad ways we have wrung more wealth out of the living planet.  To give Smith credit, he did note with regret the genocide of Native Americans in the European land grab which he describes as caused by the “misfortunes” of violence, attributable to the “accident” that the “discovery” of America occurred at a particular time when “the superiority of force happened to be so great on the side of the Europeans.” We now understand that the violent exploitation of peoples and land is not a mere “accident” of the system but a requirement of capitalism [7]. 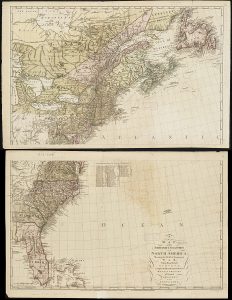 Knowing the historical details and political theories of the origins of economic growth, however, does not draw an end to the logic of its thinking, especially given its inflationary feedback loops.  To make a cultural shift away from infinite growth today, it might help to understand the cultural shift that took place in the eighteenth century, an intellectual revolution as important as any political one:  how did people come to believe that economic growth was continuous, desirable and natural?  Antony Brewer, notes the significance of this new belief:  “The idea that (capitalist) economies normally grow over time was a major change of perspective, part of a wider change in which people ceased to think of past, present, and future as essentially alike” [8].  How did people cease to think of past, present and future as essentially alike?  By reading novels, or, at least, such changes in phenomenological time become visible through narrative fictions of social mobility.

We most often link the rise of the novel–with its shift in temporal orientation through unique individual plots–to the myth of upward mobility, paradigmatically illustrated by Daniel Defoe’s Robinson Crusoe (1719).  But when we look closer at the late eighteenth-century novel, we find, instead, story after story of economic loss.  From The Vicar of Wakefield (1766) to David Simple (1744), downward mobility is the dominant myth circulating in the sentimental novel.  Everyone is only ever one bad investment away from being out on the street.  That the dominant story in the novel is one of loss at the identical time in history when economic growth becomes the regular state of affairs is striking.  Why the seeming contradiction?  On the surface, stories of downward mobility betray an empathy toward the victims of a market economy and present a challenge to capitalism.  Harley in The Man of Feeling (1771) or David Simple in Sarah Fielding’s eponymous novel are victims of an emerging commercial marketplace based on anonymous and financial exchange.  For this reason, Janet Todd has called this literature “ardently anti-capitalist” [9].  On the level of content, downward mobility tales solicit sympathy for the losers of speculative capital.  We feel for the unfortunate Vicar of Wakefield who is forced to leave his home when the merchant with whom he has invested his life savings runs off with the money. 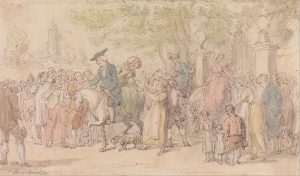 “The Departure from Wakefield” (c. 1817) by Thomas Rowlandson

But on the level of form, I argue, these stories are doing something else.  My own reading concentrates on the narrative form of capital, not the thematic representation of capitalism, and reads narrative dynamics within plot, characterization, and voice for their rendering of capital’s temporal and foundational contradiction.  For instance, Goldsmith’s use of ironic characterization in his novel shares a homologous form with capital’s circulation of debt as a financial instrument.  Thinking about capital’s form in downward mobility narratives suggests that the relationship between economic and literary history is less about content and mutually reinforcing discourses of empiricism, bourgeois individualism, and progress, and more about the emergence of new forms of understanding and new experiences of time that the speculative marketplace requires.  Downward mobility tales participate in rendering comprehensible the epistemology of compound economic growth and help to manage what David Harvey calls its “foundational contradiction” through their rendering of time [10].  In my larger book project, I argue that “riches to rags” narratives are not simply sympathetic tales about the losers of early capitalism, and neither do they function as cautionary fables to warn readers against speculative risks.  Stories of downward mobility in the eighteenth-century novel shape meaning to conform to the contradictory logic of infinite economic growth.  What’s interesting about The Vicar of Wakefield is that the ironic characterization allows Goldsmith to tell a story where the Vicar is released from debtor’s prison without paying his debts, a narrative logic akin to how buying and selling debt anonymously within capitalism allows for the speculative growth where some people (like Lehman Brother’s traders post-2008) get away without paying their debts and others lose their homes.  It is Goldsmith’s use of novelistic characterization that allows the reader to overlook the missing plot point of who pays the owner of the debt [11].  In other words, the stories we narrate may change our experience of the world not only on the level of what they tell but how they tell it, the narrative form the story takes. 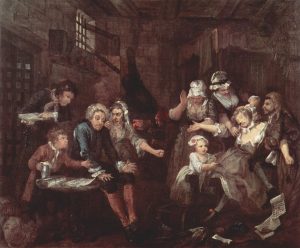 When we think about the form of the eighteenth-century novel–how it textures time and molds character–we start to see how culture makes socially comprehensible something like compound economic growth.  Such thinking does a few things.  First, it suggests that our contemporary climate crisis requires more than scientific knowledge or economic theories to effect change:  it will require a large-scale epistemological shift in our collective imagination in order to inhabit a world without growth.  Second, it reminds us that cultural forms are the primary place such collective imaginations emerge, though such change often happens not on the level of representational content (this is perhaps why ‘raising awareness’ through didactic environmental documentaries doesn’t do much to effect change).  We need to change our experience of time, and, as Paul Ricoeur has taught us, narrative is fundamentally about time.  Stories embody the temporal dynamics that give life its texture and meaning.  Perhaps thinking more about narrative form and less about CO2 levels will help end our addiction to growth.  While some still believe technology will save us and that solar or biofuels will produce more energy so that we will not have to give up spring vacations in the Caribbean or 2,000 square foot houses, many others are now wondering if we need to embrace downward mobility as a way to save the planet.  Our biggest hope for a reduction in CO2 comes from a financial crash:  the only time in recent history when CO2 levels have decreased is following the 2008 crash [12]. But the eighteenth century teaches us that we also need a different way of telling stories.  If the novel is the revolutionary narrative form of the eighteenth century that allows people to comprehend infinite economic growth, even when it tells stories of financial failure, what will be the narrative form of a post-Capitalocene zero-growth era?

[3] For a discussion of our addiction to upward mobility, see Jeff Rubin’s The End of Growth.  (New York:  Random House, 2012).

[4] Andreas Malm, Fossil Capital:  The Rise of Steam-Power and the Roots of Global Warming.  (London:  Verso, 2016).  See Kent Linthicum’s article in this collection for a description of a steam engine predating James Watt’s machine (“Austen and the Anthropocene”).

[6] Phyllis Deane and W. A. Cole were the first to date the origins of continuing economic growth to the 1760s.  See their British Economic Growth, 1688-1959.  (Cambridge:  Cambridge University Press, 1967).  In “The Industrial Revolution, ” Nick Craft overviews the historical work on economic growth and revises down the rates of growth to 1.4% for 1780-1801 and 0.6% for 1760-1780.  See The Economic History of Britain Since 1700.  Ed. Roderick Floud and Donald McCloskey.  (Cambridge:  Cambridge University Press, 1994):  44-59.  It must be noted that an increase in overall wealth does not necessarily mean an increased standard of living for all.  Wealth distribution is a separate matter.

[7] Eric Williams’s classic study Capitalism and Slavery was one of the first critical texts to demonstrate that capitalism requires violence.  See Nick Allred’s article in this collection for a further discussion of eighteenth-century political theory and the colonialization of North America (“Locke’s American Wasteland”).