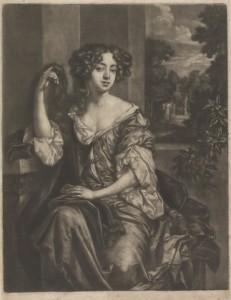 By the end of the first decade of Charles II‘s reign, the King had acquired a reputation for his many mistresses; his patronage of the theater; and his interest in natural philosophy and the new sciences [1]. These pursuits and those of his most prominent court mistresses, Barbara Villiers, Duchess of Cleveland; Nell Gwyn; Louise de Kéroualle, Duchess of Portsmouth; and Hortense Mancini, Duchess of Mazarin shaped two movements in England, libertinism and sensibility. Writers’ frequent depictions of these women gave new prominence to a remarkable figure in literature, the female libertine, that remains with us.

Dangerous Women, Libertine Epicures, and the Rise of Sensibility, 1670-1730 (Ashgate 2011) rewrites the history of libertinism and sensibility and considers the female libertine in relation to cultural, philosophical, and literary contexts that contributed to her transformations from the late seventeenth to the early eighteenth centuries in England.  I argue that there are five representative types across a diverse group of texts, including “Lady Lucretius” in John Dryden’s Marriage A-la-Mode (1671); “Lady Sensibility” in Aphra Behn’s The Luckey Chance, or an Alderman’s Bargain (1686) and novella, The History of the Nun (1689); “The Humane Libertine” in Catharine Trotter’s epistolary narrative, Olinda’s Adventures (1693), and only comedy, Love at a Loss, or the Most Votes Carries It (1700); “The Natural Libertine” in Delariviere Manley’s The History of Rivella (1714); and “The Amazonian Libertine” in Daniel Defoe’s novel, Roxana (1724) [2]. These authors created female libertines that made lasting contributions to later depictions of the figure, partially inspired by Epicurean ideas found in Lucretius‘s On the Nature of the Universe, which experienced a revival in late Stuart England. Behn and other libertine writers found its destabilizing proposal that all matter, including humans, is composed of free-floating, constantly moving atoms attractive. Thomas Creech’s multiple English translations of Lucretius’s text created a relationship between atomism and the emotions that reflected seventeenth-century natural philosophers’ interest in the connections between the soul and body. Early writers of sensibility were likewise concerned with the physiological effects of heartache made evident through their characters’ weeping, fainting, illness, or even death. Sensibility converged with libertinism in its attention to the senses in the late seventeenth century. 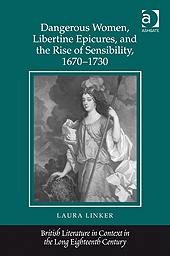 Charles II’s French mistresses, Portsmouth and Mazarin, who held salons in London during the 1670s, helped to transmit French ideas and culture to England, including characteristics of sensibilité that influenced Behn’s creation of “Lady Sensibility.” The court mistresses became the most influential women in England during the 1660s, 70s, and early 80s. Literary figures modeled after them persisted long after their “reigns” at court were over.

There is a current spate of historical biographies and romances about Charles II’s mistresses in the literary marketplace [3]. Next year will mark seventy years since the publication of the first bestselling modern historical romance set during the first decade of the Restoration, Kathleen Winsor‘s Forever Amber (1944). Published during the Second World War, the novel was banned in Boston and several other cities when it first appeared, mainly for its questionable morality and highly suggestive scenes involving the heroine, Amber St. Clare, a female libertine modeled after several of the real-life and fictional women I examine in Dangerous Women. Current books about female libertines owe a debt to Forever Amber, as bestselling novelists Philippa Gregory and Barbara Taylor Bradford, among others, have admitted. Readers still consistently place Forever Amber at the top of their “Historical Romance” lists, and the novel was re-released in 2000.

In 2002, Elaine Showalter reviewed the 2000 edition of Forever Amber for The Guardian, confessing to having been, as a young girl, “awed by Amber’s courage, daring and strength. Rereading the novel now is no disappointment, and I am also impressed by Winsor’s subversive feminism and the scope and ambition of her historical imagination.” Most of the characters in the novel, including Amber, reflect Hobbesian tendencies, vying with each other to achieve precedence at Charles II’s court in the 1660s. The novel demonstrates Winsor’s command of the historical and literary figures she re-imagines from the Restoration. Her characters’ vanity, plotting, and cruelty resonate with historical records of figures Amber encounters at the Carolean court, Newgate prison, and Alsatia in Whitefriars, the London “sanctuary” for criminals. Winsor drew the characters from the hundreds of accounts, poems, plots, and textbooks she claimed to have read before writing the novel.

Amber’s many marriages and romantic relationships certainly read like an early amatory plot. Born on a dark and stormy night, Amber is the long-lost child of two ill-fated aristocrats separated by the English Civil Wars. Her parents die, and she is raised by villagers of Marygreen, where she is a misfit. Like French seventeenth-century romances by Madame de Scudéry, who influenced Behn and other early English novelists, the story relies on remarkable coincidences. The novel signals that Amber is of noble, not peasant, stock, evident also in her captivating looks, a quality she shares with early romance heroines. One of Amber’s most generous lovers, Captain Rex Morgan, describes her in language we find in Restoration comedy about heroines: “I see you have wit as well as beauty, madame. That makes you perfect” (181). Winsor blends qualities of female libertines in her depiction of Amber, who rises through every class position in the novel to achieve greater autonomy and power through varied performances. 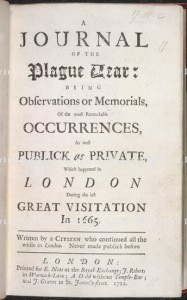 Part of Forever Amber‘s continuing appeal remains in its sweeping survey of 1660s London and the meticulous attention to historical detail. Winsor used Daniel Defoe’s A Journal of the Plague Year (1722) as a source for Amber’s experience of plague in London in 1665, and her novel blends elements of other plots by Restoration and early eighteenth-century writers. Like Defoe’s Moll Flanders, Amber makes an early career out of trickster-ism and thievery, landing in Newgate prison after her trial. As an actress in the Restoration theater and then a court mistress of Charles II, Amber resembles Nell Gwyn. Defoe’s Roxana, also modeled on Gwyn and Mazarin, is perhaps Amber’s closest literary antecedent. As Amber rises higher in her liaisons with powerful aristocrats, her one consistent relationship is with her maid, Nan, who gives her advice and rises with her, much as Amy counsels Roxana through relationships and crises about the discovery of her “real” identity. Both Roxana and Amber have husbands who desert them early in the narratives, leaving them penniless. Disgraced when she dances for the court in a sheer costume, Amber becomes the “Amazonian Libertine” at court, and the scene parallels Roxana’s dance in her exotic costume. Both women experience a vague punishment at the end, and there is no narrative closure in either text.

Amber experiences disillusionment from her lover, Lord Bruce Carlton. Their relationship echoes plots by Manley, Behn, and Trotter, whose heroines are mistreated or left by cruel and faithless lovers. Carlton sees Amber as a lower-class village girl, even when she becomes a wealthy Duchess. Midway through Winsor’s novel, Amber, now the mother of Carlton’s son, tearfully pleads with him to marry her, but he refuses, arguing that “love has nothing to do with it” (426), a concise description of upper class marital relations frequently examined in Restoration and eighteenth-century comedy and fiction.

Amber’s downfall results partly because of her class aspirations, mirrored by Winsor’s depiction of the Duchess of Cleveland, still Barbara Palmer when she first arrived to Charles II’s court as his mistress. On June 24 1667, Samuel Pepys complained of Cleveland’s influence (she was then called Lady Castlemaine) in his Diary because it produced “the horrid effeminacy of the King,” who “hath taken ten times more care and pains in making friends between my Lady Castlemayne and Mrs. Stewart, when they have fallen out, than ever he did to save his kingdom.”  Though powerful, Cleveland never received a true marriage proposal from the King. She fell from power after he lost patience with her tantrums and ambition. So too with Amber and Carlton.

Single-minded in her social-climbing, Amber seems unaware that she lives in an exciting decade of scientific discovery. She never engages philosophical debates about atomism or Descartes’s mechanical theories of the body, ongoing discussions that we find the most interesting female libertine figures examining in literature. Despite a brief liaison with a student early in the novel, Amber does not question him about his studies or read his books. She lacks associations with any leading thinkers at the Carolean court and does not debate the merits of Epicurean pleasure, the existence of animal spirits, or the theological assertions of “right reason” with theologians or members of the Royal Society she would certainly have met at Whitehall. Perhaps, had Winsor continued writing the sequel she originally planned, she would have featured a more complex female libertine and a more mature Amber, a figure styled after the Duchess of Mazarin, who developed  an intellectual life as interesting as her adventures [4].  But that is another story for another time.

[1] Charles II cultivated this image. Tim Harris’s excellent article, “Charles II: The Reality Behind the Merry Monarchy,” concisely summarizes historical scholarship on Charles’s reign and the man behind the throne.

[2] Manley was considered a “dangerous woman,” even in the twentieth century. Winston Churchill, descendent of the Duke and Duchess of Marlborough, describes Manley, who satirized his ancestors, as “a woman of disreputable character paid by the Tories to take part in a detraction which in the intense political passion of the time, was organized against Marlborough” (2: 53-4).