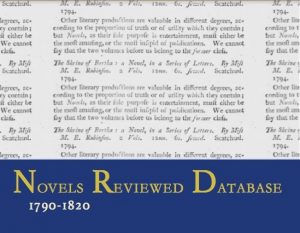 The period from 1790 to 1820 was a significant moment in British women’s literary history.  During this period more women published novels than men, even as the novel was solidifying as a respected literary genre.  By the end of this period the novel was reputable enough a medium for Sir Walter Scott, celebrated poet, to pen the wildly successful Waverly series (1814).  His success, however, came on the backs of the many women novelists who paved the way before him in the previous thirty years.

But what was the contemporary critical response to such a momentous period in the history of the British novel?  The Novels Reviewed Database, 1790-1820 (NRD) seeks to uncover just that.

The NRD is the first and only database to focus on one genre’s historical reception.  Cataloging reviews of novels from the period’s two foremost review periodicals, the Monthly Review and the Critical Review, the NRD brings together book reviews and book market data, providing a repository of criticism reacting in print to this period in the novel’s, and women’s, literary history.

The NRD includes 1,836 book reviews, representing 1,215 novels and 445 identified authors.  It features transcriptions of review criticism as well as data on women writers, novels, and review periodical makeup.  The NRD contains a unique combination of contemporary primary sources that speak to the novel’s solidification as a literary genre during this period, including review articles, advertisements, and novel prefaces, many from archival sources not available digitally.

The NRD also offers a data-set by which distant reading of this period in literary history can be explored, uncovering for the first time the Reviews’ role in shaping our modern novel canon.  Distant reading studies of the novel, such as this study from the NRD of publisher William Lane, offer a new means of asking questions about the history of the novel and how contemporaries experienced its evolution.  Its scope enables the NRD to encourage a broad survey of the literary marketplace in which the novel grew in the late eighteenth century, one that brings forward the many anonymously published and still obscure women novelists from this period that are often neglected in our study of the novel.  The NRD presents opportunities for text mining review criticism, tracing economic market changes in novel production and sales, or publishers’ trends, tracking the novel’s evolving gendered authorship, understanding how reviewers discussed and understood a novel’s authorial gender, and excavating growing genre parameters by which the novel was evaluated and effectively produced.

The NRD is currently in Phase I of three phases of development.  Phase I features transcriptions of review criticism—criticism that due to poor OCR in digital archives and scattered periodicals collections, are currently unavailable to most scholars.  The NRD seeks to make this text corpus available to scholars in an open-access relational database platform.  This platform, Phase II, which introduces a review bibliography, novel publication data, and authorial gender demographics, is under construction with hopes of a 2017 release.  Phase III will provide users with review page images and the ability to read issues of the Reviews in their entirety, tagged review subjects and the power to create their own tagging profile, and a formula builder to manipulate NRD data for their own research.