Faculty and students at the University of Pittsburgh at Greensburg are working on a long-range digital project (Digital Archives and Pacific Cultures) to code and analyze the voyage narratives of eighteenth-century European expeditions to the Pacific, together with the English poetry and print media that responded to the published accounts of Pacific voyages.  We are attempting to study the cross-cultural significance of European voyages in the Pacific and cultural contact experiences in Oceania and Australia, using digital coding and “text-mining” to collect information from very long voyage records in systematic ways through computational methods.

One phase of our work involves preparing digital editions of Pacific voyage publications by Hawkesworth, Cook, and the Forsters in TEI XML (the language of the Text Encoding Initiative) to meet a world standard for accessible and consistently encoded digital texts.  (For more on the Text Encoding Initiative, please see http://www.tei-c.org/index.xml).  Some of the voyage accounts we have prepared for the site have not been freely available online in any searchable form before.  Some are available in proprietary or public databases but have not, to this point, been united in one place.  In addition to preparing editions, we have collected the geographic coordinates recorded in these publications using regular expression matching and autotagging, in order to generate Google Earth & Map views of the voyages.  Our Google Earth projections of Wallis’s and Cook’s voyages offer a clickable interface, so that selecting a compass rose point along the voyage brings up a paragraph or block of text from a voyage record describing events recorded in connection with this place.  Here is an example.

We have also been preparing TEI XML editions of poems, plays, and excerpts from literary and philosophical texts that respond in some way to the Pacific voyage publications.

These texts were located by searching the ECCO and ECCO TCP databases, and we will be adding more material from these resources and the Burney Collection.  Our students have been preparing and marking these files to code specific kinds of cultural interactions so that we can study how English texts represented Pacific encounters and identify the types of interactions which seem to have caught the interest of Atlantic-bound media.  We’ve also provided an interactive clickable interface to “color-code” the poems, highlighting names of people and places as well as the cultural markup our students have applied:  See our edition of Anna Seward’s “Elegy on Captain Cook” (1780).  Please see also our edition of Gerald Fitzgerald’s “The Injured Islanders” (1779), produced just before the news of Cook’s death became known in England.  We offer Fitzgerald’s poem as a significant contrast to the cultural representations in Seward’s work.

The project began and is developing at the University of Pittsburgh’s Greensburg campus, but the site’s initial development joined a team of faculty and undergraduate students at the Pittsburgh and Greensburg campuses.  As the project continues to develop, it combines classroom teaching of digital humanities research methods together with new research to build a publicly accessible resource.  Our texts and markup and our data visualization experiments are very much a work in progress and are freely available to the public for reading or to download as the basis of new digital projects under a Creative Commons license.  Our site will continue to expand over the next few years as we experiment with topic modelling the Pacific voyage texts and as we develop new maps, search tools, and network graphics, working with new groups of students. 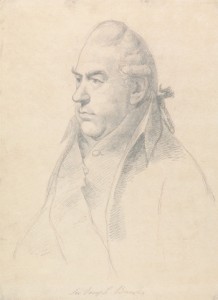 Iceland didn’t make much of an impact on eighteenth-century British literature.  Mount Hecla appears every now and then in poetic evocations of the far-flung edges of the world, and there is a well-known joke in The Life of Johnson about Johnson’s ability to quote verbatim an entire chapter of Niels Horrebow’s Natural History of Iceland (tr. 1758).  (It is the chapter on snakes, which runs simply, in James Boswell’s slightly misquoted version, “There are no snakes to be met with throughout the whole island.”)  When Sir Joseph Banks went to Iceland in 1772, leading the first major British expedition to the island, it was more or less by accident:  he had been planning to accompany James Cook on his second voyage to the South Pacific, but the Admiralty intervened because of what they saw as Banks’ excessive demands for space for his equipment and his companions.  Deciding not to waste the organizational efforts he had already made, he simply headed north instead of south.  Yet even if Iceland fell short of Tahiti and the other South Sea islands in terms of sheer distance and glamour, a small but significant body of English-language writing on the island started appearing in the last decades of the eighteenth century and the early years of the nineteenth, much which proclaims itself to be the product of exactly the sort of scientific and philosophical curiosity that ostensibly drove the more elaborate, glamorous, and high profile expeditions to the South Pacific.  Most of these accounts of Iceland are framed in more or less utilitarian terms, as a straightforward pursuit of scientific knowledge, but in fact they tend to slide more or less precipitously from dry records of height, distance, and other such measurements into the language of the magical and the fantastic, as writers attempt to convey the impact of what they suggest is the almost indescribable Icelandic landscape.  The result is an intriguing if relatively unfamiliar body of work that not only offers glimpses of a part of Europe that remained both literally and figuratively on the fringes of the known world in later eighteenth-century Britain, but also that demonstrates some of the complexities and challenges facing travel writers as they tried to merge their scientific and cultural observations with an evocation of what they present as the strange and wonderful world around them.

Given the novelty of Iceland as a destination at the time of Banks’ expedition, and even for decades afterwards, it is hardly surprising that the later eighteenth-century writers who took it as their subject tended to insist upon the value of the information they were offering rather than calling attention to the charms of their style.  The English translation of Uno von Troil’s Letters on Iceland–the only published account of Banks’ expedition–foregrounds the matter-of-fact rather than the literary, addressing matters ranging from volcanoes to Icelandic cuisine and to the varieties of whales to be found in Icelandic waters, among many other topics–according to the presumed interests of the person being addressed.  Yet that is not quite what one would expect if one judged by the book’s reviews.  The Monthly Review, for example, seemed to find von Troil’s picture of Iceland less a matter of facts and figures than it was a vision of the exotic, the mysterious, and the dangerous–in a word, of the sublime.  Describing Iceland as a fantastical place that “within a small and almost inconsiderable space freezes with the utmost rigour, and burns with all the violence of the most intense flame” (187-88), the reviewer presents a version of the country that might sound at least somewhat at odds with von Troil’s deprecating assessment of it as a “dreary” land “so little favoured by nature” that “one is tempted to believe it impossible to be inhabited by any human creature” (25).  Yet the reviewer’s rhapsodic evocation of a sublimely elemental world of fire and ice is not as unjustified by von Troil’s prose as one might be tempted to think if one looked simply at the headings of his letters or leafed through his accounts of matters such as Icelandic breeds of cattle or the economy of the in-shore fishery.  The language of science repeatedly slips into the poetic, the sublime, and the wonderful.  In von Troil’s hands, the landscape is not merely empty but actively hostile, made up of “vitrified cliffs, whose high and sharp points seem to vie with each other, to deprive you of the sight” of what little greenery there is.  Even as simple a matter as the absence of trees around the coastal villages becomes an occasion for an oddly plaintive moment of inverted pastoralism:  “a single tree,” von Troil writes, “does no where appear that may afford shelter to friendship and innocence” (25).  Indeed, von Troil himself suggests that the language of science might be inadequate to his needs.  A long letter to a Professor Bergmann of Stockholm about geysers that specifies the heat of the water, the mineralogical composition of the surrounding rocks, and other such matters concludes with a lamentation that “the best description will fall very short” of the “most uncommon phænomena” that he witnessed at Geysir, because it would require “the pen of a Thomson” to create an adequate idea of the scene (257).

The idea of Iceland as a land that demands a poetic imagination to convey scientific fact can be further illustrated by a quick glance at travelers’ accounts of what was perhaps the most famous of the island’s natural phenomena, Mount Hecla.  Understandably, given the late-eighteenth-century interest in earth sciences, it attracted the fascinated attention of British travelers and readers alike, and in one respect, accounts of Hecla from this period could be read as exemplifying the power of science to kill myth.  Supposedly the haunt of demons and the entrance to hell, Hecla seen up close was simply another mountain, according to Henry Holland, who climbed it in 1810, when, as a young medical student, he accompanied Sir George Mackenzie to Iceland.  Yet even so, Holland’s journal presents the snow-filled crater at the summit in terms that recall von Troil’s reactions to the geysers, as he moves from matter-of-fact observation to an evocation of magic and fantasy:  “The bottom of the crater,” Holland writes,

Is filled with a vast mass of congealed snow–which by the process of melting, gradually proceeding during the summer, has been hollowed beneath in several places, so as to form caverns of some extent.  Entering these caverns, we were surprized & gratified by the singular beauty of their appearance–the congealed snow had acquired a bluish transparency of colour, the effect of which in certain points of view, was at once extraordinary and pleasing–The magical palaces of an eastern tale, could not have been better illustrated to the eye.  (260)

This oscillation between the languages of science and romance is something that Holland maintains elsewhere in this journal.  “If a foresight of the infernal regions of mythological story were desired,” he writes of Krýsuvík, “this would be the spot where the wish might best be gratified” (128).  He then turns, matter-of-factly, to a detailed description of the sedimentation patterns of the clay and rocks.

Passages such as this underline the difficulty, in this writing, of sustaining any distinction between scientific and the more self-consciously literary travel writing of the Enlightenment.  The result, for Holland and others, are accounts that suggest the inadequacy of either scientific travel or the more conventionally belle lettristic type of travel writing to communicate fully what the traveler is seeing.  Of course, the attempt to represent in language the supposedly unrepresentable is something of a cliché by the end of the eighteenth century, but that does not make these journals by early travelers to Iceland any less innovative or intriguing.  As Holland attempted (in his words) both to add to “the interests & advancement of science” (273), and to give an adequate sense of his own pleasure in and wonder at a place that was remote, in all senses, from anything he had previously seen, he is demonstrating the flexibility rather than the limitations of the genre of the travel journal.  Just as importantly, he is also helping to shape the concept of Iceland, in the minds of British readers of the day, as a place that is not only a scientific curiosity but also, and even because of that, exceeds all they can imagine of the sublime.