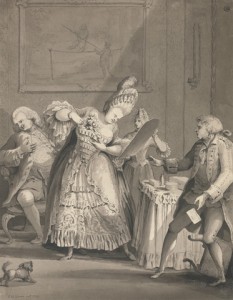 We often think of feminism as something belonging to the twentieth century.  But in 1791, Olympe de Gouges (1748-1793) wrote:  “Man, are you capable of being just?  It is a woman who asks you this question…  Tell me, what gives you sovereign empire over my sex?”  The first lines of the Declaration of the Rights of Woman and Citizeness might seem, to many of us, ahead of their time.  De Gouges responded to the lauded and well-respected Declaration of the Rights of Man and Citizen (1789) by publishing a feminized form of the text two years later.  In it, she demands access to the political sphere for women and imagines a re-conceptualized form of marriage.

De Gouges was not, however, the only feminist of her time.  The French Revolution saw several women’s rights activists, and her ideas evolved along with and responded to the chaotic and rapidly changing events of her era.  Like that of many of her contemporaries, de Gouges’s story ends in tragedy:  she was executed in 1793.  Her other progressive ideas—which she took pains to make public—did not aid her in her cause.  She argued against slavery and was openly hostile to Maximilien Robespierre (whom she invited to a duel!).  To this day, the circumstances leading to her death and execution remain a subject of debate.  Was she killed, as so many others, because of her support for the king or was the fact that she was a woman more to blame?  What was the effect of the abolitionist play that she published in 1792?  There are compelling arguments that all of these issues helped bring about her demise.  De Gouges was tried soon after the Girondins, many of them abolitionists, including Jacques-Pierre Brissot.  Madame Roland, and Marie Antoinette were also killed during the same month-long span as de Gouges.  A Jacobin newspaper suggested cruelly just days after their deaths that these women had somehow deserved their fates.[1]

De Gouges’s story is long and complex, but in this short blog piece I will focus on her legacy.  She has, in the past two hundred years, been considered a maligned revolutionary, a disregarded loon, and an inspiring martyr.  The story of how we remember this early feminist reveals more about us than it does about her.  It also offers a poignant example of the continued importance of studying the eighteenth century.

Marie Gouze was born in Montauban in southern France in 1748.  Though her parents were not noble, she claimed to be the illegitimate daughter of the Marquis de Pompignon (1709-1784), also a playwright.[2]  The date that she arrived in Paris is somewhat unclear, but she fashioned a name for herself among the aristocracy and became Olympe de Gouges in the 1780s.  During this time, she was involved in a long-lasting controversy with the Comédie Française about the performance of her abolitionist play—which finally occurred in December 1789.[3]  Abolitionism was one of many political issues about which this playwright made her opinion known.  The Revolution seemed to respond to her ardent desire to change the world for the better:  she joined the abolitionist Société des Amis des Noirs, attempted to raise money for young women’s dowries, and opposed the common practice of sending unmarried women to convents.  An enslaved female character in her 1792 play, L’Esclavage des Noirs, ou l’heureux naufrage, declared boldly that slaves “would not always be in chains.”[4]  In her letters written from prison in 1793, she seems sincerely befuddled that her ardent political fervor would have endangered her life, but it did.

A burst of what we would read today as admirable activity demanding women’s equal rights ended tragically in 1793 and was replaced by outright hostility.  The century following the French Revolution was not the most progressive period for women’s rights in France.  They lost the right to divorce.  The feminist movements of the 1830s and 1840s argued for women’s inclusion in the public sphere based on their innate emotional nature.[5]  These arguments for rights look very different than those of the Revolution and often seem less than radical to the modern reader.  By the end of the nineteenth century, ideas of hysteria contributed to a false but powerful notion of women’s innate biological inferiority.  Women did not win the right to vote in France until 1944.

De Gouges’s legacy as a forgotten and maligned woman who was not respected for her political positions began with the Jacobin newspaper article claiming that she deserved her fate.  She was quickly remembered as someone who somehow deserved to die for her beliefs, then she became an historical figure who was largely forgotten.  When she was remembered, she was belittled.  In the mid-nineteenth century, historian Jules Michelet dismissed her as an illiterate, weak-minded woman caught up in a world she did not and could not understand.[6]  In the late 1850s, Charles Monselet condescendingly explained her desire to write by what must have been her fear of becoming unattractive after thirty.[7]  At the end of the nineteenth century, early psychologists examined her works in detail for proof of rampant hysteria among female revolutionaries.  Alfred Guillois’s 1904 work on the playwright studied her œuvre as “the document that best allows [us] to judge the disorder of her judgment and reasoning abilities.”[8]  Guillois read through her medical records to find proof of some kind of disorder that would make her belief in women’s rights understandable.  Appallingly, a century after her death, daring to claim that women deserved equality was understood to be a psychological condition.

Happily, feminist scholars have done significant work to revive the legacy of de Gouges in the last few decades.  Simone de Beauvoir wrote about her in The Second Sex (1949).  In 2011, her Declaration became available in its entirety in English.  In 2010, her philosophical text, Le Prince Philosophe, was added to the many of her works already available in German.  Former French presidential candidate Ségolène Royal just published a book on stories of courage, including de Gouges’s.  There are now streets and schools named after her in France.  De Gouges is now revered rather than reviled.

I would like to suggest that when we think of feminism as a phenomenon unique to our time, it is due, at least in part, to this long period of hostility—a time during which de Gouges was either maligned or forgotten rather than respected.  Her ideas—though over 200 years old—are actually quite modern and often remain, even today, revolutionary.  De Gouges fought ardently, albeit sometimes imperfectly, for the rights of society’s many downtrodden.  How we have remembered her fight shows us that progress toward equality is perhaps more cyclical than linear, which means that the past has much more to teach us than we often imagine.

Further Reading on Olympe de Gouges, Her Life and Times:

Scott, Joan W.  “A Woman Who Has Only Paradoxes to Offer,” in Sarah Melzer and Leslie Rabine, eds.  Rebel Daughters:  Women and the French Revolution.  Oxford:  Oxford University Press, 1992.

[3] You can find all three versions of her play, along with information about the battle with the theatre, in Sylvie Chalaye’s 2006 reedition of L’Esclavage des nègres, ou, l’heureux naufrage.

[5]For more information on this subject, see the work of Claire Goldberg Moses and Naomi Andrews.

There’s no question that celebrity style has long had an impact on the fashion world—think Beau Brummell, Lillie Langtry, Jean Harlow, Katherine Hepburn.  The question is how new is the celebrity-cum-couturier?  The life of the British actress Mary Robinson (1757?-1800) would suggest that celebrity clothing and accessory lines are, in fact, nothing new.

It is November 1794. The French Revolution has taken a sharp turn for the worse, and Britain and France have been at war for well over a year and a half. The English have recently witnessed the Treason Trials and the suspension of Habeas Corpus at home and the September Massacres, the Reign of Terror, the Glorious First of June, and the execution of Robespierre across the Channel. Soldiers are dying, the British government is hunting down spies and locking up radicals, and the nation is in a state of social and political unrest. It is at this time, at the very height of this tension, that Mary Robinson—the former actress, fashion icon, celebrity sensation, and mistress of the Prince of Wales—debuted her two-act comedy Nobody at London’s Theatre Royal, Drury Lane. The 29 November 1794 performance did not go well.